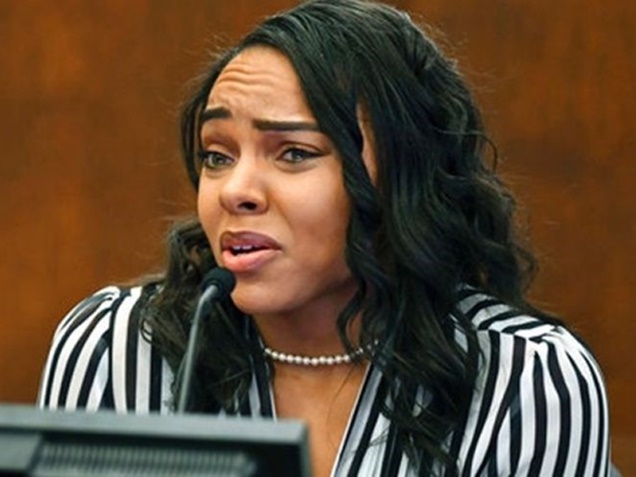 When it comes to painting a blank picture, Aaron Hernandez fiancee Shayanna Jenkins-Hernandez is the Queen of “I don’t recall!”

What is crazy is that Shayanna Jenkins-Hernandez struck a plea deal to tesitfy against Aaron Hernandez, but it was basically a waste…

LatinoAthlete.com has learned that Shayanna Jenkins-Hernandez played clueless and careful choose her words on the witness stand Thursday.

Here is the latest on the former New England Patriots tight end Aaron Hernandez trail from the courtroom at Suffolk Superior Court.

One thing we can say about Shayanna Jenkins-Hernandez is that she ain’t no SNITCH or RAT.

The 27-year-old testified against Hernandez saying pretty much nothing, but her it it:

She “learned to keep her mouth shut and ‘not to ask any questions’ in certain situations.”

Shayanna, was consistently resistant to prosecutor Patrick Haggan, essentially neither recalling nor remembering anything of note.

“She did not recall” receiving a phone call from Hernandez in the minutes after he is alleged to have shot de Abreu and Furtado.

When it came to the questioning of Aaron’s tattoo the he and Jenkins-Hernandez got during a trip to California, Shayanna says she discovered it on Pinterest. Huh?

Aaron’s reads: “Remind me that we’ll always have each other … ” and Shayanna’s says “… When everything else is gone.” It is said to be part of a lyric from the band Incubus.

When asked what her tattoo says, she replied:

“Oh geez, I’d have to look” (signaling that doing so would require disrobement).

Judge Jeffrey Locke spared her of that. She was also asked about what would Hernandez do down in his basement “man cave,” (which included a pool table, bar, weight room and movie theater). She claimed she didn’t know. Basically, Jenkins-Hernandez’s testimony was again offered brief, vague, mostly useless answers.

What a waste! Aaron was probably smiling.

LatinoAthlete Staff - July 5, 2015
0
International Fight Week is set to be chock-full of fights and combat sports, so you will have to set a lot of time aside...