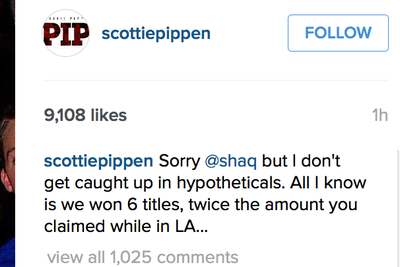 Which squad are you taking?

We would beat em by fifty “what you think”. Let me know and don’t hold back

We would beat em by fifty “what you think”. Let me know and don’t hold back

Shaquille O’Neal randomly took to Instagram on Sunday evening to let everyone know the collection of Lakers greats Magic Johnson, Kobe Bryant, Elgin Baylor, himself, and Kareem Abdul-Jabbar could beat a Bulls squad featuring Derrick Rose, Michael Jordan, Scottie Pippen, Dennis Rodman, and Horace Grant. And not only beat them outright, but win by 50 points!

It’s not a surprise to see that Pippen isn’t buying it:

Sorry @shaq but I don’t get caught up in hypotheticals. All I know is we won 6 titles, twice the amount you claimed while in LA…

Burn. But then Shaq fired back with a shot of his own!

Sorry @scottiepippen I don’t believe in hypotheticals either, but I seen most of those final you did ok , but this guy did most the work . #youwereok steve kerr and Ron harper deserve more credit than you , remember I WAS BATMAN YOU WAS ROBIN , I was PUFFY YOU WAS MASE…

Anybody need a T MOBILE SIDEKICK. I GOTTa PRETTY GOOD ONE #BESTSIDEKICKEVER

Of course, the truth is that the REAL winners of this game would be the people who get to watch a bunch of legends play against each other.

Speaking of being a sidekick… if I recall correctly you know a thing or two about that as well. @shaq