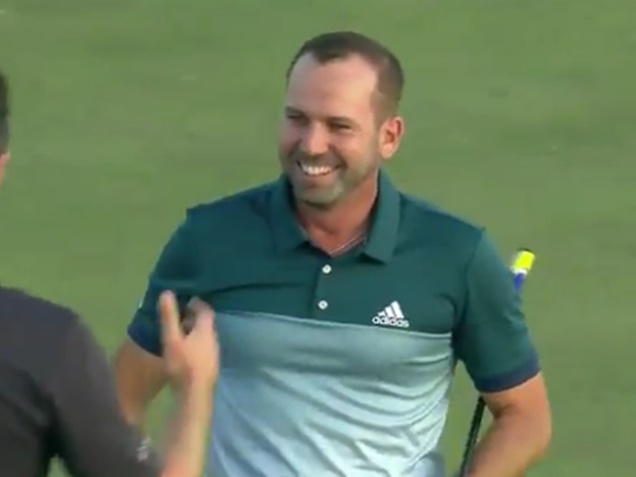 First, Congratulations goes out to Sergio Garcia for winning his first ever major Title. Garcia won the 81st Masters tournament at the Augusta National Golf Club.

Read on about Sergio Garcia…

LatinoAthlete.com told you over the weekend that Sergio Garcia could smell victory in the air and he was 100% right!

The Spaniard dubbed El Nino was tied with Justin Rose after 72 holes at nine strokes under par. It all came down to sudden-death playoff on the course. After Rose bogeyed the 19th hole of the day, Garcia birdied to end what had become a trend of disappointments in golf’s biggest events.

It came down to the 18th hole, Garcia mind was uncluttered, focused and determined, he could smell victory. Meanwhile, Rose signed for their closing three-under 69s to finish 72 holes. But it was at that sudden-death moment where Sergio shined.

García had this to say about his Triumph:

“From the drive this morning to the course I was very calm. I felt the calmness I’ve never felt on a major Sunday. Even after making a couple of bogeys, I was still very positive. I still believed there were a lot of holes I could go after.”

“I’m so happy. … It’s been such a long time coming. Obviously, this is something I wanted to do for a long time. But, you know, it never felt like a horror movie. It felt like a little bit of a drama, but obviously with a happy ending.”

Checkout the history making moment for Sergio. Relive the joy and excitement as he comes in at par 4 for the win:

Tennis coach tells player to ‘shut the f*** up’ as motivational...

LatinoAthlete Staff - August 6, 2015
0
Coach Stephen Amritraj will not be proud of this moment. Since 2008, the Women's Tennis Association's allowance of on-court coaching has produced...