You might be calling it twitter stalking but the fan was harmless, so Sergio Garcia will let Mark Johnson be his caddie. See, dreams do come true, if you’re driven like Mark.

Read more on why 37-year-old professional golfer, Sergio Garcia decided to change up his caddie…

LatinoAthlete.com has learned that established golfer Sergio Garcia will not be sticking with his normal caddie.

Instead, Sergio is shaking things up a bit, by having a fan named, Mark Johnson join him at the pro-am of the British Masters September 2017. Johnson is a regular guy, who is having his dreams fulfilled after tweeting his ideal 206. Mark continued to repeatedly ask Sergio Garcia until he finally caved saying yes.

Garcia told ESPN Tuesday at Emirates Golf Club, where he is playing in this week’s Omega Dubai Desert Classic. He writes:

“I noticed him the first time from the first tweet he posted at me. II thought it was quite funny and it was very sincere, and obviously, I was wondering how long it was going to keep going…

…Angela [Garcia’s fiancée] and I, we kind of talked about it, and I said, ‘Well, how long should we make him wait?’ And we decided that probably 200 days, if he held it for 200 days, it would probably make the cut…”

…He showed a lot of perseverance and a lot of strength and energy and stuff throughout it. Some of the tweets he posted at me were quite funny. I’m sure it will be a great experience for him and for us. Get to know one of the fans, and it should be good fun.”

Garcia is ranked 15th in the world, tied for 11th in his last start two weeks ago at the Singapore Open. Here are the tweets from Mark: 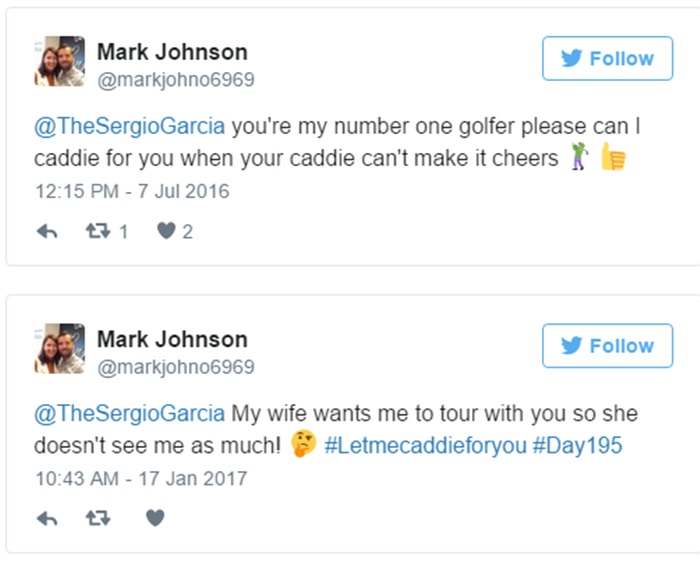 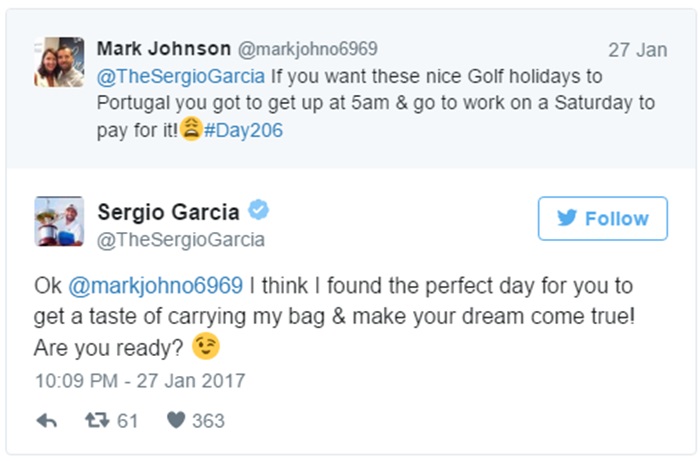 LatinoAthlete Staff - August 9, 2015
0
Six days of competition, two teams remain. The 2015 International Dota 2 Championships have been the most unpredictable and exciting tournament of...