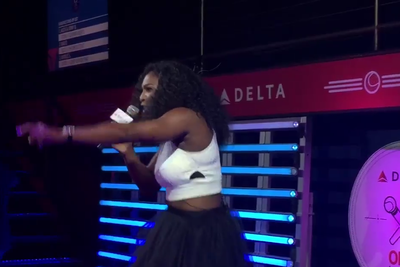 It’s just the latest time the tennis legend has shown her love for the singing microphone, as she gave some New York City fans a taste of her karaoke love at the same Delta event last year.

And Serena has some other karaoke moments in the past as well, including one with former nemesis Martina Hingis:

Not only is she a tennis GOAT, but she at least puts herself in the discussion of karaoke GOAT as well.

Update: Serena was not done, providing a little Boys II Men “Motown Philly” for the crowd.