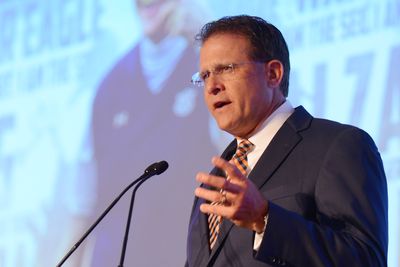 What now? Last week, Nick Saban seemed to say Alabama’s poor performance in the Sugar Bowl was due in part to some players getting NFL Draft evaluations before the game. Whether he was making an excuse for that loss or just complaining, his claim doesn’t stand up upon examination.

The next bizarre claim from an SEC coach came from Auburn’s Gus Malzahn, who said SEC teams are at a disadvantage in the Playoff due to tough conference schedules. Nevermind that if you can’t recover from a game over a month ago, you’re injured and should go to the dang doctor already.

This all follows a few months of the SEC complaining about Big Ten teams setting up satellite camps and even Missouri’s Gary Pinkel issuing hot takes about Notre Dame.

Tough schedules somehow weren’t problems when the SEC was reeling off national championships, so I’m not sure why it’s such a big problem now. It’s okay to admit you lost to a better team.

Hard-hitting news you can use. We spoke with top recruits at The Opening, and they discussed the best and worst emojis. STOCK UP: Kissy face. STOCK DOWN (WAY DOWN): 100.

Classic saying, really. Steve Spurrier has a rule about players getting caught with marijuana: “Three pots and you’re out.”

Yikes. Pitt defensive end Rori Blair was charged with DUI amongst other things, after getting caught driving 117 mph. Not a typo.

Wolverines with something to prove. Folks in Michigan are feeling good about the future with Jim Harbaugh, but the Wolverines have a tough test in the season opener against Utah. Go in depth into what should make the difference.

Rich Rod doing work. Arizona is the only program in the Pac-12 that has never been to a Rose Bowl, but as long as Rich Rodriguez is running things, they should be in the running for the Pac-12 South.

U(AB)PDATE! UAB football is targeting 2017 for its return to the field, and the Blazers won’t have to deal with the bowl ban that other transitioning programs have to go through.

That seems unusual. The 911 call by Florida State running back Dalvin Cook’s accuser has surfaced, and Cook’s attorney believes it helps Cook’s case.

Crootin’! Lots of it!