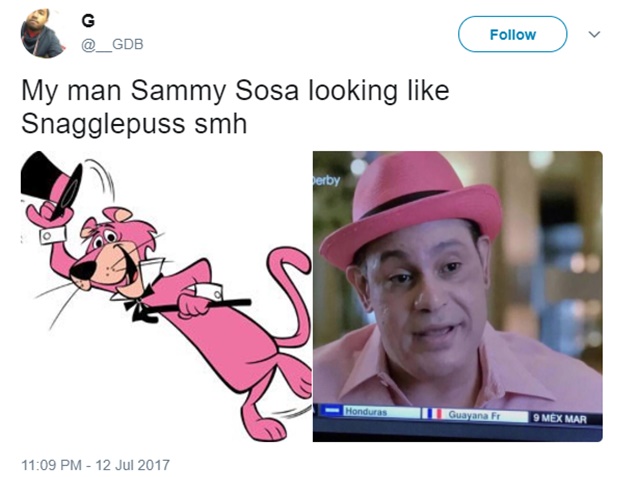 OMG, Sammy Sosa is whiter than ever! The former MLB player appeared in a video montage during the ESPY Awards, and fans are once again shocked by his ghostly complexion.

What is going on with Sammy Sosa? Read on…

LatinoAthlete.com got our hands on this tweet of Sammy Sosa and all we can say is Oh My God, what has happened to his complexion?

Sosa made a surprise and unexpected appearance in a video clip at the 2017 ESPY Awards. It all went down on July 13, and fans were baffled by his appearance.

Sammy is 50 Shades lighter than when he played on the Chicago Cubs!

Is that you, Sosa!? The former baseball star appeared in a video montage during the ESPY Awards, and fans cannot get over his much lighter complexion. Sosa wore all pink to the Espy’s which was not the color to wear since he’s whiter than a ghost these days.

The jokes didn’t stop there, another tweeted:

Fans were in a state of denial saying “No way that’s Sammy Sosa!” They just couldn’t believe that Sammy bleached his skin.

“What happened to Sammy Sosa?”

We agree, what happened?

Back in 2009, Sosa addressed the situation, slamming reports stating that he was trying to be like the king of pop.

“It’s a bleaching cream that I apply before going to bed and it whitens my skin some. It’s a cream that I have, that I use to soften [my skin], but has bleached me some. I’m not a racist, I live my life happily.”

Does he look that white every where now?

LatinoAthlete Staff - August 8, 2015
0
After being bailed out of jail, Smith denied that he was driving under the influence, stating that "the truth will come out." San...