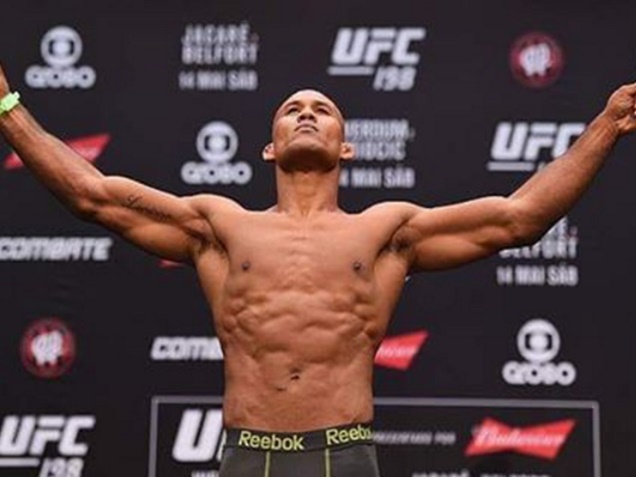 While gearing up for his UFC 208 fight against Tim Boetsch, Ronaldo Souza UNLEASHED his thoughts on Luke Rockhold. Jacare says Luke is a BIG “CHICKEN!”

Ronaldo Souza and Luke had a fight last year but needed to reschedule, but Rockhold has accepted a new date for their postponed rematch!  When MMA Fighting asked UFC fighter Ronaldo “Jacare” Souza about the unscheduled rematch with Luke Rockhold he weighed in.

“He said he’s hurt, but I see him training all the time on social media, and then he said he wanted to face Jon Jones in a grappling match in January. That makes no sense. He’s not hurt. If he’s injured, he can’t grapple Jon Jones. That’s impossible.”

“It bothers me because I wanted to fight in November. Injuries are part of the sport, it happens, but I never thought Rockhold would fake an injury. At first I thought he was hurt, but now I see he just chickened out. It’s clear he’s not injured.”

Ronaldo Souza is disappointed with Rockhold, and believes that he never was injured, just scared to face him. Souza has only lost once in his career inside the Octagon to Yoel Romero, is now set to fight Tim Boetsch at UFC 208 in February.

Here is what he had to say about his upcoming fight:

“At least I have an opponent and a fight. Fighters that stayed inactive for a long time don’t do well in the end, so I wanted to stay active. My intention was to fight a top contender in the division, but everyone is hurt.”

“This guy is trouble. Tim Boetsch is trouble. He has a heavy hand and can complicate anyone, but I will stay focused to put on a great fight and win. His power is incredible. He’s really dangerous. If you blink, you might wake up later wondering what happened.”

The 37-year-old Brazillian took to social media sticking to his motto, stating:

Remember when Ronaldo Souza defeated Vitor Belfort in the 1st round at UFC 198. Yeah, it was one badass moment last year in the UFC. Take a look below:

The NFL Lets Players Be Creative Only When It Makes The...

Manuel Frias - December 5, 2016
0
The NFL, the gracious institution that it is, relaxed its strict uniform code for Week 13 and permitted players to wear customized cleats during...