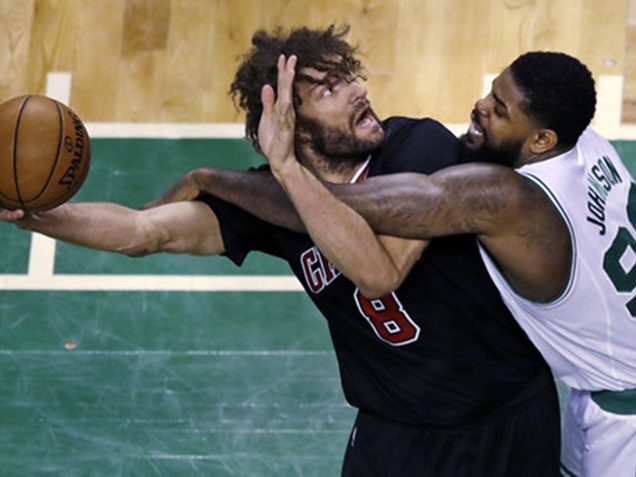 Chicago Bulls player Robin Lopez could surely pose as a thorn in the Celtics side since the Bulls dribbled up a 111-97 win over Boston in Game 2 of their NBA Eastern Conference.

Robin Lopez weighed in on his team winning game 2…

LatinoAthlete.com has learned via Robin Lopez that he has helped to make the Bulls a unconquerable powerhouse team in the playoffs.

“What we did was not an easy thing, winning two games in the playoffs on the road. In Boston. That’s a tough thing to do. But they’re still the No. 1 seed for a reason.”

The Cuban NBA player is the one who has established a presence in the paint the Celtics can’t match. Lopez is also the presence that has cleared the way for the impressive numbers put up by his more celebrated teammates.

The Bulls player has made 14 of 20 shots, averaging 16.0 points in two games against the Boston Celtics

Lopez weighed in on game 2:

“Yeah, a little. I was able to put pressure on the rim in the first game and I went out and tried to keep on doing that tonight. When I can do that, it opens things up for the other guys, my teammates. We were able to do that again tonight.”

Here is what Lopez said about chipping in as a scorer for the Bulls:

“That shot’s open. I’m just going to try to shoot it with confidence. I am sure Bobby (Portis) would tell you the same thing, or Niko (Mirotic), whenever we are passed the ball, we are told, shoot it if it is open. That makes it easier to shoot the ball. Makes it easier for it to go on.”

But before you say he’s getting ahead of himself, pump your brakes because Robin Lopez is on cruise control focused on the game:

“We have been very focused so far, and that is going to be the key for us. I said earlier, we have been taking it possession by possession. When we don’t, they’re going to make runs. But that is part of the game. The focus has been very good for us.”

Do you think the Bulls will go all the way?

LatinoAthlete Staff - August 8, 2015
0
The Tampa Bay Yankees were all set to host the Clearwater Threshers on Friday night. The game even got underway, but then...