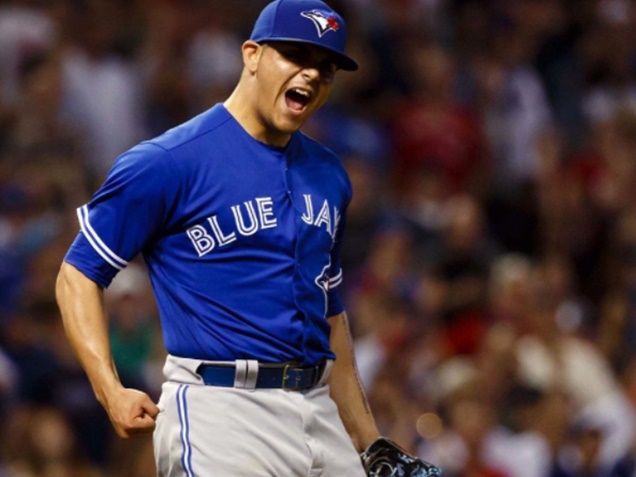 Toronto Blue Jays pitcher Roberto Osuna closed out the game against the Astros with a ground out to Carlos Correa. The Puerto Rican MLB player sounded off stating he felt Osuna was “showing him up.”

Now, Roberto Osuna is responding to Carlos Correa. Read on…

LatinoAthlete.com has Toronto Blue Jays closer Roberto Osuna response to Houston Astros Carlos Correa who was made that he pitched a clean 1-2-3 inning to save a 7-4 win.

The Blue Jays won the game and Carlos Correa seemed to be salty since the final out was on him. We guess he doesn’t like being the one who made his team lose?

It happens to the best MLB players. Following the play Houston Astros shortstop Carlos Correa called out Roberto Osuna for his conduct on the final play. Osuna walked to first and tossed the ball making it clear Correa was an easy out.

It was just a simple play, but Carlos took it way too personal.

Roberto Osuna weighed in saying this prior to Friday’s game between the Blue Jays and Astros:

“I don’t why he thought I was showing him up. I was going to flip the ball to first base, but Smoakie wasn’t there yet. He gave me a little bit of time because he didn’t run hard to first base, that’s it … If I did something wrong I apologize because that wasn’t my intention.”

After Osuna responded, Correa decided to dust it off as a nonevent.

“For me it’s not a big deal, the way I said it yesterday I was laughing about it because this is baseball. People have different reactions to different plays. The play was nothing special.”

We’re glad these two have squashed it since they will be sharing a locker room together for the All-Star game.

The Mavericks put on a full court press for free agent...

LatinoAthlete Staff - July 2, 2015
0
Dallas appears to be the frontrunner to sign the free agent center. The Dallas Mavericks have made DeAndre Jordan their top priority...