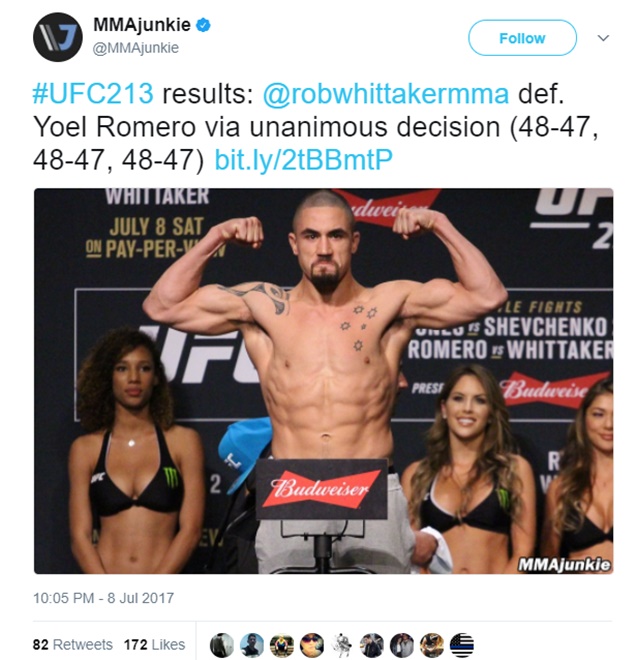 Robert ‘The Reaper’ Whittaker did the unthinkable, he took out Yoel Romero in the surprise main event from T-Mobile Arena.

LatinoAthlete.com thought for sure that Yoel Romero would walk out the victor, but that didn’t happen. Instread it was Robert Whittaker who won the interim belt with a unanimous-decision.

The judges score cards read as follows via (BR) Twitter:

Ouch, that is a blow to Romero especially after all the hype and his impressive workout session he did during the weigh in for the bout.

UFC 213 fans got a surprise main event that was one to remember as Whittaker took out Romero in a battle for the interim belt.

Robert Whittaker continues to impress with his skill set on the mat. He has a remarkably smart manner to attack the legs and body with front kicks as well as set up steps to close the distance. He throws calculated punches which help to win over the judges. Not only that Robert’s wrestling defense was outstanding. He knows how to command space while standing made for another excellent performance. Whittaker is becoming that MMA fighter to watch. If he continues to impress with this level of skills he will go on to be one of the greats.

Athletic director says Michigan was offered to play at 160,000 seat...

LatinoAthlete Staff - July 7, 2015
0
It was either in North Korea or at a race track, probably. Neutral site games are all the rage in college football these...