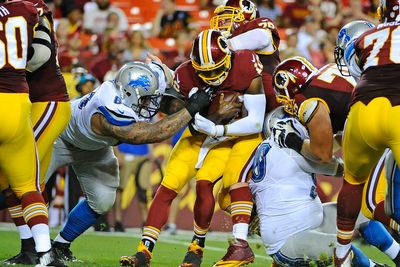 Robert Griffin III will not play on Saturday. We break down the fantasy implications.

Washington quarterback Robert Griffin III (concussion) will not be cleared to play on Saturday against the Baltimore Ravens. Griffin suffered a concussion last week and was previously cleared on Thursday.

It initially appeared that Griffin would be cleared to play, but an independent neurologist ultimately recommended that the QB be held out and retested in a week or two.

The offensive line was seemingly nonexistent last week and it led to RG3 getting beat up in the pocket. Coach Jay Gruden said on NFL Network Griffin is “coming along” in the new system, but it has not shown in the preseason games. Gruden also said it’s not just about the quarterback and it’s more about the team improving.

For fantasy, what else is there to say? Griffin just can’t stay on the field and his production isn’t there right now. Fantasy owners can leave him undrafted in most leagues while receiver Pierre Garcon is not as appealing in PPR leagues. He was nothing more than a late-round pick anyway.