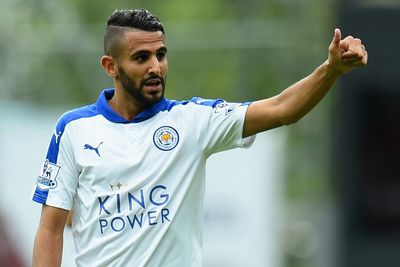 Manchester United have problems, while Everton and Leicester are just fine.

The Premier League delivered again on Saturday, with 12 goals across five games. Of course, the match involving West Bromwich Albion didn’t contribute to that, because why would it? Tony Pulis will never change. It’s a good thing we have Leicester and Norwich in the league to give us something else to watch.

Manchester United fans have lost their patience with Wayne Rooney

He might still go and score 30 goals this season as he makes a habit of doing that whenever people think he’s about to fall off a cliff, but he’s been really unbelievably poor in United’s first two games. Instead of being happy that they have six points from their first two matches, United supporters are panicking about going into a season without another center forward as good as, or better than Rooney among their ranks.

Is Ross Barkley back?

Thought Barkley was unreal as well today, could have had two goals, had an assist and barely made a wrong decision all game.

A week after scoring an absolutely brilliant goal, Barkley bossed the game for Everton away to Southampton, notching a goal and an assist in an excellent performance. He struggled last season as he recovered from injuries and got moved around constantly by Roberto Martinez, but he’s looking like the player who broke into the England senior team two years ago.

Sunderland can’t blame their struggles on a lack of investment

Advocaat’s excuse about needing attacking quality coming in doesn’t wash either. Norwich have Jerome and Hoolahan up front.

Yes, we clearly need more quality but that’s a poor excuse for the pathetic displays of this season so far.

The good news for Sunderland is that this is par for the course. They’ve gotten off to horrific starts in most of their seasons during this current run in the Premier League, and every time they avoid relegation. But at some point, they’re going to fail to make a great escape and just get relegated. This could be the year if they dig a hole that’s deep enough.

The Mike Ashley years have damaged Newcastle fans beyond repair

Welp. Daryl was not good today, but we can all resolve that doesn’t mean we need to sell him off, right?

The level of overreaction in NUFC twitter is staggering.

After a good first week performance, Newcastle went and submarined their own chances to beat Swansea. Daryl Janmaat picked up a first half red card and from there, the Swans were well in control. How are Newcastle supporters reacting to a freak occurrence that led to a loss against a team that hung with Chelsea for 90 minutes last week? By thinking the sky is falling, of course.

We can’t blame them. This is what supporting a Mike Ashley-run team does to people. But they have some good young players, and Steve McClaren deserves quite a bit of time before the torches and pitchforks come out.

Walker yelling at Lamela to track back and help out.

We haven’t been able to retain possession since Kane went off.

For 60 minutes, Tottenham dominated Stoke City. They were by far the better team. Then they subbed Harry Kane off as a precaution due to a knock, with Erik Lamela replacing him, while Nabil Bentaleb came on for Ryan Mason, who’s still trying to work his way back to full fitness after an injury in preseason. These substitutions were disastrous.

While Lamela and Bentaleb didn’t directly contribute to Stoke’s two goals, they were the reason the Potters had so many chances. Spurs couldn’t keep or win the ball back to save their lives once Mason and Kane exited, which allowed Stoke to put the Tottenham defense under constant pressure, and they folded. Lamela, in particular, turned in one of his worst performances in the Premier League, which is saying quite a bit.

xG map for #watfordfc–#wba. This appears to have, at least technically, been a football match today. pic.twitter.com/icDSiPbRl4

Six shots for West Brom. Zero on target. One big chance shanked. Why Saido Berahino isn’t trying to force a move, no one will ever know.

This goal wasn’t even Mahrez’s best moment of the game. That came in the first half, when he broke one defender’s ankles, then nutmegged another before forcing Adrian into a solid save. He was Leicester’s best player, and if they stay up, he’ll probably be the biggest reason why.

SEC at Playoff disadvantage because of tough games from months earlier,...

LatinoAthlete Staff - July 21, 2015
0
In Auburn's most recent game, it lost to a Wisconsin team that had previously played the national champions while the Tigers were...