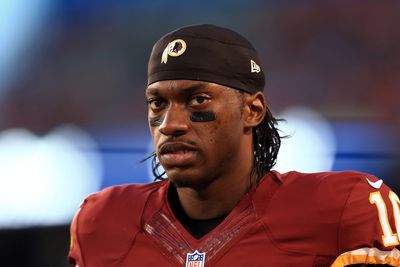 Griffin said in an interview he thinks he’s at the top of his game, but also recognizes he has to go out and prove it.

Tom Brady has won four Super Bowls, Aaron Rodgers is the reigning MVP and Peyton Manning holds almost every major passing record imaginable. But according to Robert Griffin III, they aren’t the best quarterbacks in football.

In an interview with WJLA Sunday, Washington’s QB said he is optimistic as he enters his fourth professional season, even though he has failed to replicate the success he enjoyed as a rookie in 2012.

It’s nice to see the confidence from Griffin, whose career has been mired with controversy and injury ever since he won the Rookie of the Year Award. He tore his ACL in a wild card game against the Seahawks three seasons ago, and suffered a disclosed ankle in Week 2 last year. All the while, he engaged in a seemingly yearlong feud with head coach Mike Shanahan in 2013.

But there is a difference between confidence and outrageous hyperbole. Given how poorly Griffin compares to the real top quarterbacks in the league, this statement falls into the latter category.

Later in the interview, Griffin did concede that his resume doesn’t stack up to the greats at his position.

“Any athlete at any level, if they concede to someone else, they’re not a top competitor, they’re not trying to be the best that they can be,” Griffin said. “There’s guys in this league that have done way more than me. But, I still view myself as the best because that’s what I work toward every single day.”

But it is difficult to walk back from saying you’re the best quarterback in the game. If Griffin doesn’t want that quote thrown in his face all season long, he’ll have to rekindle his performance from his rookie season — and do it fast.

LatinoAthlete Staff - June 12, 2015
0
SportsNation quizzed Nick Young on the most important question of our time: which lyrics are from Iggy Azalea and which are from...