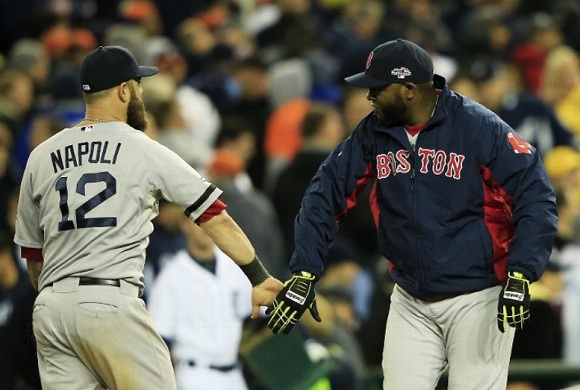 In this series, Napoli has been the one hitting key home runs, while Cabrera remains stymied by a tough Boston bullpen.

Napoli opened the scoring with another big long ball, Junichi Tazawa again bested Cabrera in a crucial spot and the Red Sox moved within one win of reaching the World Series by edging the Detroit Tigers 4-3 on Thursday night.

Napoli opened a three-run second with his homer off Anibal Sanchez. Detroit’s starters had allowed only three runs in 27 innings through the first four games of the series. After pitching six no-hit innings in Game 1, Sanchez allowed four hits — three earned — in six innings Thursday.

Down 4-2 in the seventh, the Tigers put runners on first and third with nobody out when Jose Iglesias and Torii Hunter singled. Cabrera, who struck out with runners at the corners against Tazawa in the eighth inning of a 1-0 loss in Game 3, hit a soft grounder to second for a double play this time.

Detroit might be without catcher Alex Avila in Boston. He left after the top of the fourth with a strained left knee and is day to day.

After Napoli’s homer, Jonny Gomes — starting in left field instead of Daniel Nava — reached on an error by Cabrera at third base. One out later, 21-year-old Xander Bogaerts — who started at third instead of Will Middlebrooks — hit a double.

Boston returns to Fenway Park with a 3-2 lead in the American League Championship Series. The Red Sox can win the AL pennant Saturday, when the Tigers’ Max Scherzer faces the Red Sox’s Clay Buchholz in Game 6.