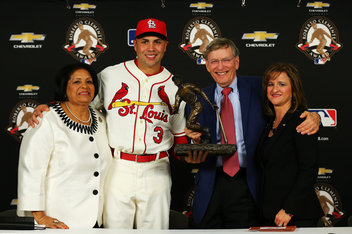 by The Associated Press

Carlos Beltran of the St. Louis Cardinals is this year’s recipient of the Roberto Clemente Award.

Beltran was seated next to Clemente’s widow, Vera, when he was honored Saturday, about an hour prior to Game 3 of the World Series against the Boston Red Sox. Members of Clemente’s family also attended the news conference.

“I must say this year’s recipient truly exemplifies Roberto’s philosophy,” Vera Clemente said. “Carlos Beltran, you are the pride of all Puerto Ricans.”

Beltran has contributed more than $4 million to his Carlos Beltran Academy in Puerto Rico and has hosted fundraising efforts throughout the year.

“A leader by example on the field, Carlos has demonstrated his leadership off the field as well,” Selig said. “The academy has made a real difference in the lives of young men in Puerto Rico.”

The award recognizes the player whose contributions on and off the field best represent the game. The award was named for Pirates Hall of Famer Robert Clemente, who died on Dec. 31, 1972, in a plane crash while on a humanitarian mission to assist earthquake victims in Nicaragua.   Beltran grew up idolizing Clemente’s achievements.

Contributor - March 22, 2017
0
As the days grow longer, the nights shorter is feel like forever when it comes to Victor Cruz finding a new team. Victor Cruz marriage...