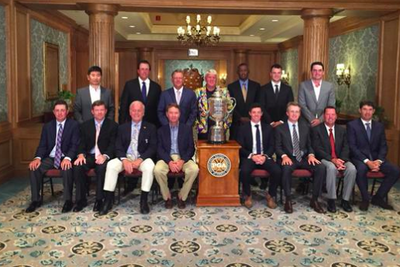 Where have you gone, Tiger Woods?

And thanks to that lifetime exemption rule, we’ll keep getting John Daly on one of the bigger and most competitive stages in golf. Daly always goes out of his way to stand out in these Champions photos — last month he wore some outrageous St. Louis Cardinals blazer at the British Open dinner and now he’s in some hypnotic multicolored design.

Very cool evening. Proud to be invited as @Keegan_Bradley ‘s +1 to the Champions Dinner at the @PGAChampionship pic.twitter.com/5GBF5i13dn

More notable than Daly’s coat, however, is the the conspicuous absence of Tiger Woods. The four-time PGA winner was on the grounds all day practicing and holding his regular Tuesday press conference. He’s at Whistling Straits. He likes to attend this dinner. So, uh, where is he? Everything ok, Mr. Tiger?

Brendan Schaub on UFC’s Reebok Deal: ‘Fighting Will Not Pay the...