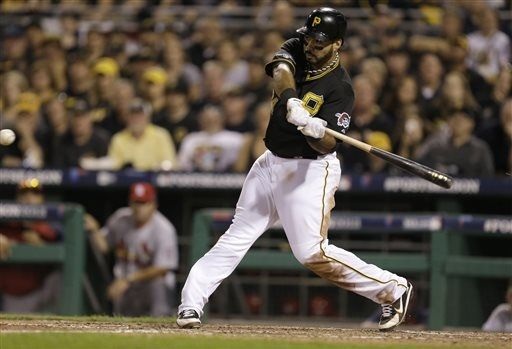 Harrison scored on Pedro Alvarez’s tiebreaking single Sunday, sending the Pirates to a 5-3 victory over the St. Louis Cardinals that staked Pittsburgh to a 2-1 lead in the best-of-five NL Division Series.

Russell Martin followed with a sharp RBI single against reliever Kevin Siegrist, who took over after Carlos Martinez (0-1) faltered.

The go-ahead single was the latest big hit by Alvarez. He homered in the first two games against St. Louis and is 4 for 10 with four RBIs in the series.

Alvarez also kept the Pirates’ famous flag flying high in October. “Raise the Jolly Roger!” is the rallying cry for this wild-card team, now one victory from its first postseason series win since Willie Stargell, Dave Parker and the “We Are Family” gang won it all in 1979.

Heady territory for a franchise that had endured a record 20 consecutive years of losing coming into this season. Six months later, the Pirates are on the cusp of knocking out baseball royalty.

Beltran finished 2-for-3 with three RBIs. His 16th playoff home run moved him past Babe Ruth for eighth place in postseason history.

Contributor - February 11, 2017
0
Brazilian MMA fighter Anderson Silva was bobbing and weaving as questions kept getting thrown his way about his future in the UFC. The former UFC...