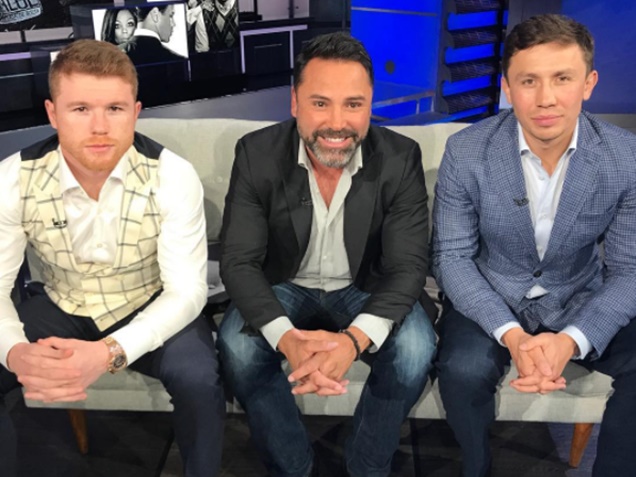 Golden Boy Promotions leader Oscar De La Hoya has had enough with UFC President Dana White who announced his McGregor vs. Mayweather three weeks ahead of Canelo vs. GGG.

Is Dana White clapping back at Oscar De La Hoya for allegedly booking his day? Read on and see what Oscar is saying…

LatinoAthlete.com would first like to say that we completely agree with Oscar De La Hoya when it comes to Floyd Mayweather fighting Conor McGregor.

Mixing a UFC fighter with a professional boxers is completely “disrespectful” to the sport of boxing. However, Dana White is not listening, because its breaking down to one common factor, money.

Getting back to Oscar De La Hoya vs Dana White, it appears that White decided to get at ODLH the best way possible. Hurting his pockets, by booking the McGregor vs. Mayweather three weeks ahead of Canelo vs. GGG.

Will this hurt On-Demand and ticket sales? Most likely not, but White may be doing this as a way of payback since ODLH bashed the McGregor fight as nothing more than a “circus.”

Wednesday night, Oscar appeared on ESPN with Canelo Alverez and Gennady Golovkin, weighing in on Dana up-streaming him.

“It was disrespectful. I would have thought that Dana White would have a little more respect with this boxing event taking place, because look, you just don’t do that.”

Oscar breaks it down with this example:

“It’s like having the Super Bowl and then three weeks later the World Series takes place, the final game. It just doesn’t happen.”

“We have the whole year to stage these types of big events … They could have maybe staged it in November or December but, look, it is what it is.”

He concludes by saying:

“We have a superfight here. We have a real fight, and that’s exactly what we’re focusing on.”

Take a look at ODLH weighing in of Dana White’s McGregor vs Mayweather fight:

LatinoAthlete Staff - August 24, 2015
0
UFC Fight Night 74 ended in shocking fashion as Charles Oliveira was forced to wave the white flag against Max Holloway after suffering what...