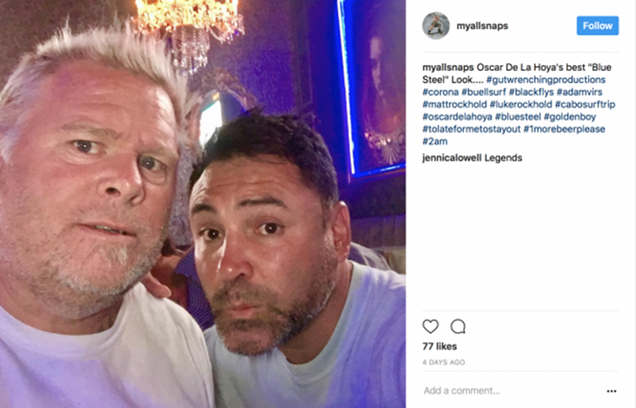 Earlier this year, Golden Boy Promotions CEO Oscar De La Hoya was pulled over by police and arrested on suspicion of drunken driving.

Well, it appears that someone has a bit of a drinking problem again. Oscar De La Hoya cleaned up his life in 2015 after his boxing career ended due to his drinking. The 43-year-old, admitted that he has suffered from alcoholism since he was a teenager. In 2008, he retired after a successful boxing career. Following his retirement Oscar went into rehab. The 10-time world champion in six weight divisions boxer continued to build his Golden Boy Promotions brand, but this time he was sober.

“I cleared my head. It’s like I’ve taken the whole car apart to put it back together again. Those grungy gyms where I started? That’s where I’m going to discover the next Oscar De La Hoya.”

Well it appears that his sobriety only lasted a couple years. Apparently Oscar De La Hoya has been boozing a little too much in 2017. We understand that he is a work-a-holic. In January he was pulled over for speeding in Pasadena shortly before 2 a.m., the drunken hours. De La Hoya failed a sobriety test and was taken into custody. He was cited for a DUI and released to his manager. 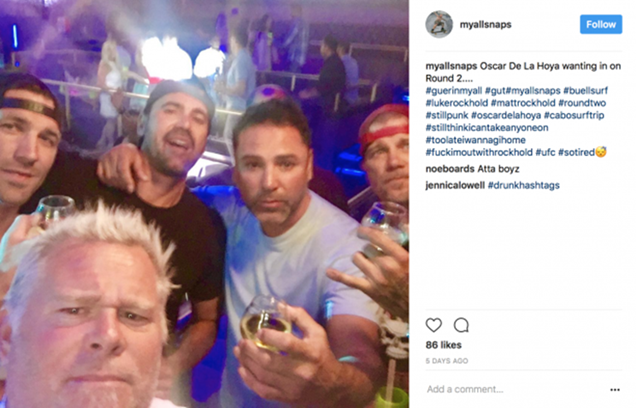 Since then Oscar has been on a low profile and we haven’t heard anything about him boozing it up until now. We are just one week away from the Cinco De Mayo fight between Canelo Álvarez vs. Julio César Chávez Jr., and now this?

We caught wind that Oscar De La Hoya was getting wasted in Cabo with some friends. The news comes from TerezOwenz, who first broke the shocking news that De La Hoya is off the wagon for a second time this year.

Oscar De La Hoya Drunk Details per a source who posted the photos:

“Washed up Oscar de la hoya taking shots in cabo. Omg he looks.really bad. I guess he has nothing to.anymore. I was shocked when I saw these pic on instagram. He used to the golden boy and he’s taking shots with.ranmdons people in mexico”

Oscar De La Hoya looks a mess in these photos. He should know better not to be taking pictures in tourist areas of Mexico. We all know it’s going to show up on the internet.

Maybe with the fight right around the corner Oscar was just doing a little pre celebrating? Hopefully he wasn’t driving. Taxi lush party of one, please!

LatinoAthlete Staff - July 10, 2015
0
The Cowboys defensive end is eligible to return in Week 5. Greg Hardy's 10-game suspension for violating the NFL's personal conduct policy has been...