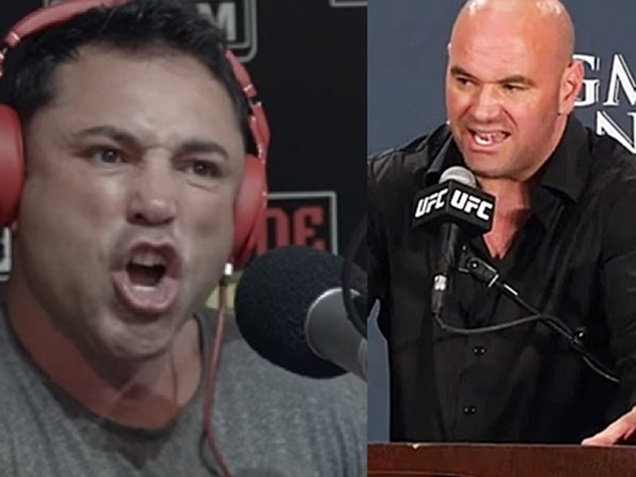 Both men are very passionate about their sports and neither one of them are backing down when it comes to the Floyd Mayweather vs Conor McGregor fight. Oscar De La Hoya Let Dana White have it! Read on….

LatinoAthlete.com has just learned from a source that Golden Boy Promotions CEO Oscar De La Hoya FIRED SHOTS at Dana White BASHING him for the Floyd vs. Conor fight.

Oscar took his chance to weigh in once again on UFC President Dana White and how he feels the Mayweather vs McGregor fight is a waste.

What is funny, is that White is upset that Oscar took his alleged date in September for his fight. But if Dana was serious about the Floyd, Conor fight he wouldn’t have dragged his feet.

We have a feeling that both De La Hoya and White agree that a boxing/UFC fight is a bad idea, but McGregor needs to get the message.

White obviously pissed off De La Hoya when he said that Oscar’s criticism stemmed from his own insecurity because Golden Boy Promotions last fight between Canelo vs. Chavez. He claimed that the Canelo vs. Chavez fight “sucked.”

Here is what White said back in May:

Oscar De La Hoya wasted no time getting his point across about Dana White and the disgraceful Floyd vs Conor fight. Plus he made sure to tell White that the Floyd vs. Conor will suck even worse.

Here is what De La Hoya said about Dana White and his Mayweather vs McGregor fight: