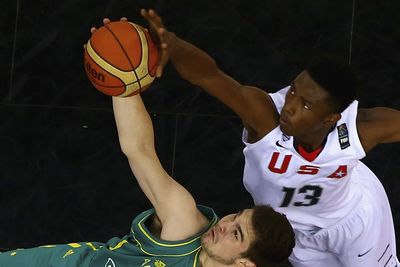 Every school in the country would love to have big man Harry Giles.

Harry Giles is the No. 1 basketball recruit in the class of 2016, according to ESPN. On Monday, he released announced his final list of college choices. Giles is considering Duke, Kentucky, UNC, Wake Forest and Kansas.

Giles is fresh off a gold medal at the U19 FIBA World Championships, where he shined despite being two years younger than many of the players in the field. Giles tied for Team USA’s lead in scoring at 14 points per game and finished second in the tournament by averaging 10.6 rebounds per game.

Giles has stated his desire to team up with ESPN’s No. 2 recruit, Jayson Tatum, in college. Tatum committed to Duke last week. The sleeper in this list might be Wake Forest, where head coach Danny Manning has been going all out to convince he can help Giles reach his potential quicker than anyone else. Manning, you’ll remember, was once a 6’10 top recruit himself.

Giles is a 6’10, 230-pound big man out of North Carolina with a 7’3 wingspan. He is entering his senior year of high school at Wesleyan Christian Academy in Winston-Salem.

LatinoAthlete Staff - February 22, 2018
0
Mikey Garcia targets a world title in his fourth weight class on March 10. Get all the details on Mikey Garcia vs Sergey Lipinets on...