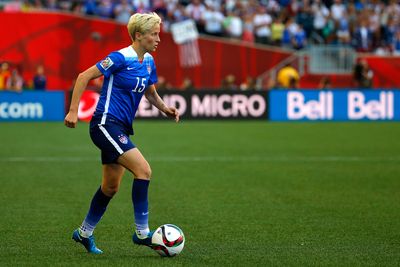 The United States women have to win to avoid some of the world’s best in early knockout stages.

The United States have locked up progression to the knockout stages of the World Cup, but their job is nowhere near done. Their draw with Sweden in their last match means they might need a win over Nigeria to secure the top spot in Group D.

If the U.S. finish top, their route to a World Cup semifinal is pretty easy. They wouldn’t have to face a group winner in a quarterfinal, and might even get one of the weaker runners-up. But if they don’t finish top, they’ll have to face a tough road that will feature games against Canada, Japan and Brazil.

Nigeria have been very good so far in this World Cup, and they’d probably be heading to the knockout stages if they were in any other group, but this truly has been the group of death. They’re only on one point despite playing very good soccer so far, and they’ll exit the tournament if they don’t win this game.

Of the United States‘ two central midfielders, Holiday is supposed to be the better passer, but she hasn’t been able to create much. Carli Lloyd’s always been more of a direct threat and goal-scorer than technical playmaker, so it’s up to Holiday to unlock defenses with her passing. So far, she’s just produced simple passes and turnovers.

Nigeria have a chance to grab a goal or two on the break in this game, and if they do, it’s probably going to be down their left flank. Klingenberg has looked a tad shaky at times in the Americans’ first two games, while Oshoala has been the Super Falcons’ best player. They need to get her out in space, running at Klingenberg.

LatinoAthlete Staff - June 10, 2015
0
Pro Football Focus thinks the Minnesota Vikings are primed for a postseason run, while the Arizona Cardinals could be a disappointing team...