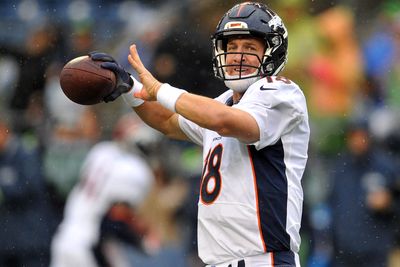 With just four games in the books so far, Saturday night brings a stacked slate — eight games in total — as the second week of the preseason schedule rolls on.

There are plenty of storylines to follow with Peyton Manning set to make his preseason debut, Tom Brady and the New England Patriots in action, Sam Bradford expected to play in a live game for the first time in nearly a year and much more.

That’s a lot of football … but don’t worry because we’ve got you covered right here with the full schedule and something to watch for during each game (all times Eastern, stations via 506sports):

As a special bonus, NFL RedZone is doing a free preview during Saturday’s games, starting at 7 p.m. Check your cable listings to find the channel.

The Dolphins’ first-team offense looked really sharp in their preseason opener — Ryan Tannehill was 6 of 7 for 56 yards with a touchdown pass on the lone series he played and Lamar Miller had three rushes for 32 yards, including a nice 27-yard cut back run. Ndamukong Suh was a disruptive force on defense, commanding double teams in his limited action, and clearly is going to have a huge impact.

For Carolina, the biggest news this week was the torn ACL injury suffered by star wide receiver Kelvin Benjamin. The loss of the second-year wideout cannot be understated for a Panthers team that really lacks playmakers outside of Benjamin. It will be interesting to watch how the Panthers’ game plan changes without their explosive No. 1 receiver, and who will step up in his absence.

The Ravens’ starting offense was practically flawless last week against the New Orleans Saints, opening the game with a 16-play, 80-yard touchdown drive.  But that was the only series where the entire unit played together. The key position battle to keep your eye on is at wide receiver, where several young players are competing to get first-team snaps alongside Steve Smith.

Sam Bradford sat out the Eagles’ preseason opener but is expected to see some time here. Bradford hasn’t played in a regular season game since suffering a torn AC in October 2013. Bradford looked good in the joint practices with the Ravens this week, but obviously this will be a huge first test for his knee and to see how he fits in Chip Kelly’s offense.

With Kevin White potentially facing season-ending surgery and Alshon Jeffery nursing a sore calf, this is a key opportunity for backup wideouts Eddie Royal and Marquess Wilson to make a strong impression and develop chemistry with Jay Cutler. Another player to watch is fifth-round pick Adrian Amos, who has moved ahead of Brock Vereen on the depth chart and is now taking first-team reps as the starting safety alongside Antrel Rolle.

Colts head coach Chuck Pagano emphasized the need to limit mistakes after a sloppy preseason opening game that included four turnovers and eight penalties. Rookie running back Josh Robinson had one of the more impressive performances in the opener and could move quickly up the depth chart with another strong showing..

There was no progress in the DeflateGate settlement talks this week, and with Brady’s suspension still looming, all eyes will be on Jimmy Garoppolo. The second-year quarterback had an up-and-down performance in the opener. He did complete 66 percent of his passes, but averaged just 5.3 yards per attempt and had a bad interception. Garoppolo, who should get the bulk of the reps again, needs to show more consistency in New Orleans.

Drew Brees, who sat out the Saints’ first game, is expected to play at least a quarter or more. The Saints might have lost two of their top receivers from last year’s team with the offseason departure of Kenny Stills and Jimmy Graham, but all the buzz in training camp this week was about the wideouts on the current roster who were making some eye-opening plays in practice all week. Look for Brees to continue developing chemistry with his new outside targets.

Blake Bortles spent a lot of time this offseason working with coaches Tom House and Jordan Palmer on his throwing mechanics and footwork. Based on his solid performance in the first preseason game, that hard work seems to have paid off. Bortles looked more confident in the pocket last week, and now needs to continue to show improvement against the Giants. This game might also see the debut of T.J. Yeldon, who could have a big impact on the Jaguars’ running game.

Even with the caveat that the Giants used a limited playbook in their preseason opener, the first-team offense was pretty awful last week against the Cincinnati Bengals, going three-and-out on their first three drives. The offensive line, which has been hit with injuries and poor play, is still in flux. Another position battle to watch is in the banged-up secondary, where the competition is wide-open at several spots.

After sitting out last week’s opener against the Seattle Seahawks, Peyton Manning is expected to make his preseason debut. The key thing to focus on is how the pocket-oriented Manning will adjust to Gary Kubiak’s West Coast, zone-blocking offense. This game also marks the return of Kubiak to Houston, where he spent eight seasons as head coach from 2006-13.

The Texans’ quarterback battle is heating up between Ryan Mallett and Brian Hoyer. Head coach Bill O’Brien has repeatedly told the media that both quarterbacks are still equal, but observations from reporters at practice this week indicate that Mallett might have a slight edge so far based on performance and fit in the team’s offensive scheme. Regardless, this competition is far from over and will definitely be something to watch for.

The Raiders’ wide receiver corps took a hit this week with the news that Andre Holmes is expected to miss 3-4 weeks with a broken hand. Holmes led the team in receiving yards last season and was expected to compete for significant playing time behind projected starters Michael Crabtree and Amari Cooper. The guys at the bottom of the depth chart now have a huge opportunity to make a strong impression, starting with this game.

The injuries on the offensive line keep piling up for the Vikings this week, who put starting tackle Phil Loadholt on IR with a torn Achilles tendon and also lost backup tackle Carter Bykowski to a season-ending pectoral muscle tear injury. Rookie T.J. Clemmings is expected to take Loadholt’s place as a starter on the line, so look to see how he fares with that group against a strong Raiders defensive front seven.

Melvin Gordon missed Wednesday’s practice with an ankle injury, but participated fully in Thursday’s session and told reporters that he’s healthy and ready to play in the second preseason game.  He is looking to improve on his performance in the opener (six carries, 11 yards) and knows that he needs to be sharper and more decisive with his runs against the Cardinals.

The Cardinals got some bad pieces of injury news late this week. Starting guard Mike Iupati is expected to be out six to eight weeks for knee surgery and nose tackle Corey Peters suffered a season-ending torn Achilles tendon injury. Rookie Rodney Gunter is expected to assume the starting role in place of Peters, while Ted Larsen will move into the lineup in Iupati’s absence.

LatinoAthlete Staff - August 18, 2015
0
A judge has thrown out the concussion lawsuit filed a year ago by former players against the union. A federal judge in Missouri...