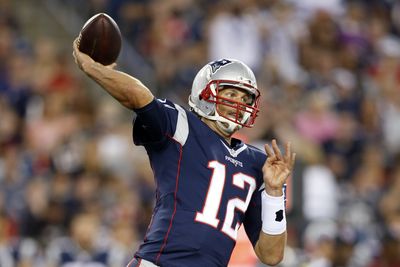 Jimmy Garoppolo shows some good things and some bad things playing the majority of Thursday’s preseason game against the Green Bay Packers.

New England Patriots quarterback Tom Brady did in fact play in Thursday’s preseason game against the Green Bay Packers, and he survived the game without incident. He didn’t look great or anything, playing in two series and attempting just four passes, but we can confirm he can still, in fact, throw a football.

Brady finished 1-of-4 for 10 yards, with no touchdowns. It’s unclear how much more of him we’ll see in the preseason, but it’s not like we really need to see much at this stage. Brady likely just wanted to get on the field in the face of all the drama of this offseason.

Jimmy Garoppolo’s performance is much more interesting, because he’s still a question mark. Garoppolo will start the regular season if Brady serves his suspension as the NFL hopes, and he saw plenty of playing time in Thursday’s game. It was an up-and-down performance overall, but he did show some good things.

Garoppolo completed 20 of 30 passes for 159 yards with no touchdowns, and he also had a bad interception. He was shaky at times, throwing to the wrong side of his receivers and saw a couple of passes go underthrown. Still, immediately after his interception, he did complete nine consecutive passes, so the Patriots likely saw what they needed to going forward.

3 things we learned from Thursday’s games

Johnny Manziel took some reps with the starters in training camp, and while the Browns insist that Josh McCown is the starter, it’s still noteworthy. On Thursday, Manziel got a lot of playing time and looked solid, not at all like a guy who spent time this offseason in rehab. He had this going for him on Thursday:

Manziel finished his game completing 7 of 11 passes for 42 yards with no touchdowns or interceptions, but he had 14 yards on two carries, including that 12-yard rushing touchdown. On top of that, he only took one sack and really showed a command of the offense. We’re not saying Manziel is going to be competing for that starting spot sooner rather than later, but it seems the Browns made a good call naming him the backup following his stint in rehab.

Tate isn’t worried about being tackled at the goal line

Detroit Lions wide receiver Golden Tate has really come into his own since joining the team. He plays opposite Calvin Johnson and that’s done wonders for him, as he caught 99 passes for 1,331 yards and four touchdowns last season. On Thursday against the New York Jets, he got things started off on the right foot:

As you can see, the Jets player going after him near the end zone is actually taking a pretty decent angle. He might even be giving up on the play a bit earlier than he should (and probably wouldn’t do that in the regular season, it’s worth noting). Whatever the case, Tate is absolutely positive that he has this 35-yard touchdown from Matthew Stafford and isn’t even a little concerned with possibly being tackled before making it into the end zone.

The biggest news for Washington was the injury to tight end Niles Paul. He went down with a dislocated ankle injury and had to be carted off the field after the training staff fitted him with an air cast. Head coach Jay Gruden announced after the game that Paul would be out for the rest of the year.

Unfortunately for Washington, there are also injuries to Logan Paulsen (toe) and Jordan Reed (hamstring) to consider. Paul is the starter, and he wound up being relieved by Je’Ron Hamm, a player who spent time on the practice squad last season. Hamm also left the game with an eye injury. Finally, running back Silas Redd left the game with a sprained right knee and had to be carted off the field. He will undergo an MRI to check for an ACL/MCL tear.

Then there’s wide receiver Pierre Garcon, who is a solid player, and one of Robert Griffin III’s top targets. The quarterback certainly looked for him on Thursday, and even found him in wide open field, calling for the reception with a surefire touchdown at the end of it. It’s the first game of the preseason, though, and … well, there might be a little bit of rust that needs shaking off at this stage:

That’s about as open as you can get, and as sure of a touchdown as you can get this side of Golden Tate, so that has to feel horrible for Garcon. Fortunately, this is the preseason and that’s not going to go down as some significant moment in Washington football history or anything like that.

The Lions have to be pleased with what they saw of the starting offense — Matthew Stafford completed both of his passes for 57 yards and a touchdown, including the 35-yard strike to Tate mentioned above. Then there was Ameer Abdullah, who put up a 45-yard run and looked impressive. For the Jets, rookie Bryce Petty is the most interesting player since Geno Smith was injured. He completed 10-of-18 passes for 50 yards, with no touchdowns or interceptions.

Aside from Brady playing at all and Garoppolo having an up-and-down game, running back Jonas Gray managed a 55-yard touchdown run for the Patriots. It was a solid game for their starters on defense, who prevented Aaron Rodgers from scoring a touchdown. Rodgers wound up playing on three drives, and he finished completing 11 of 19 passes for 117 yards with no touchdowns or interceptions.

New Orleans’ offense looked OK even with Drew Brees sitting out the preseason opener. Ryan Griffin and Luke McCown combined for a couple of touchdowns. But on defense, they got out to a slow start, allowing the Ravens to march 80 yards in 16 plays on the opening drive. That drive ended with a Lorenzo Taliaferro touchdown. Taliaferro finished with 12 carried for 36 yards and said touchdown. Matt Schaub had a touchdown pass and Joe Flacco completed 5 of 6 passes on the opening scoring drive.

The Saints’ defense didn’t finish the game well either, surrendering a 1-yard touchdown run to backup QB Bryn Renner with two seconds left in the game.

Starter Josh McCown looked great and that’s about all the Browns needed to see. He completed all five of his pass attempts for 33 yards and a touchdown, while Manziel was pretty good. For Washington, Robert Griffin III looked fine, but Kirk Cousins looked a lot better with 12 of 14 completions for 154 yards. The big question for them going forward is who is going to play tight end after all these injuries?

Bolts from the Blue recap | Blogging the Boys recap

Tony Romo didn’t see the field and Philip Rivers played just one series, but anyone (looking at you, PFT Commenter) on the Danny Woodhead comeback watch was rewarded almost immediately when the gritty running back ran up the middle for an 8-yard touchdown on the Chargers’ first drive. Branden Oliver also scored a rushing touchdown. First-round pick Melvin Gordon got six carries, but he managed just 11 yards.

Byron Jones, Randy Gregory, La’el Collins & Damien Wilson have all made standout contributions in their first-ever action with the Cowboys.

So, it was good start for second-round pick Randy Gregory, who is out to prove that he should have been a first-rounder.

Contributor - May 14, 2017
0
The Minnesota Twins third baseman Miguel Sano proved to be the difference in Friday's game against the Cleveland Indians. But that is not all...