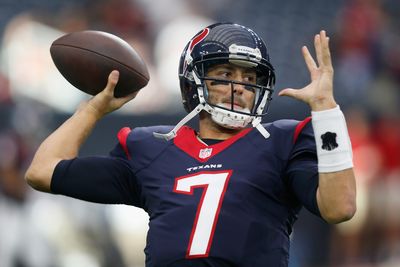 Brian Hoyer and Ryan Mallett got their quarterback battle started against the San Francisco 49ers on Saturday,

The Houston Texans got their quarterback battle underway proper in their preseason opener against the San Francisco 49ers on Saturday, and after one game … there’s no clear leader. After making a change to their unofficial depth chart to remove the “or” between Brian Hoyer and Ryan Mallett in the starter column, the team went with Hoyer to start Saturday’s game.

Hoyer only attempted four passes on the day, two of which were complete. Fortunately, one of those completions was a 58-yard touchdown to Cecil Shorts III, and he finished 2 of 4 for 67 yards and a touchdown. The Texans took him out after that initial drive, and let Mallett take over through the half.

Mallett also played quite well, completing 10 of 11 passes for 90 yards with no touchdowns, but also no interceptions. Neither quarterback was even sacked, and the Texans have to feel encouraged by this one. If these guys make the starting call a tough decision by actually playing well, it will be a good problem to have for the Texans.

3 things we learned from Saturday’s games

Tampa Bay Buccaneers quarterback Jameis Winston made his NFL debut on Saturday and it wasn’t pretty. He struggled through most of the first half, missing his receivers big time and looking uncomfortable in the pocket. He had a bad interception, which you can see below:

He did do one big thing though, when he rushed for a touchdown to end the second half. So he did manage to finish strong, but it was ultimately a tough game for him. He finished 9 of 19 for 131 yards with no touchdowns through the air and an interception, along with four carries for 18 yards and a touchdown.

The other prominent rookie quarterback and No. 2 overall selection in this year’s draft, Marcus Mariota, made his debut with the Tennessee Titans on Friday. It was a decent debut, with him looking good on some throws but bad on others — particularly his interception and the fumble that was returned for a touchdown.

49ers a mixed bag on defense

The San Francisco 49ers underwent a mountain of change this offseason, with a new coaching staff and guys like Patrick Willis, Justin Smith, Chris Borland and Anthony Davis all retiring. The first three of those players are defenders, so seeing how the first-team defense plays was of particular interest on Saturday. It wen’t poorly.

It’s worth noting that it wasn’t the complete starting defense, with guys like NaVorro Bowman and Michael Wilhoite sitting out. Still, it wasn’t an encouraging start for a team that has a whole lot to prove this season. San Francisco’s defense gave up big chunks of yardage in Saturday’s game, and that was already a problem last season. They’ll need to make some adjustments heading into their next preseason game.

Right tackle injuries for everyone

It was an absolutely rough day for right tackles across the league. First, Minnesota Vikings right tackle Phil Loadholt went down with an injury early and had to be carted off the field against the Tampa Bay Buccaneers. Unfortunately, it quickly came out that Loadholt had suffered a torn Achilles, which will effectively end his 2015-16 season.

Then it was Demar Dotson of the Buccaneers who went down. Dotson is one of the top starting right tackles in the league, but he left late in the half with a left knee injury. Dotson was playing longer than expected as the Buccaneers were trying to give Winston more time with the starters. Finally, Chiefs right tackle Jeff Allen, who was only named the starting right tackle recently, left the game with a knee injury and was declared out for the game by Kansas City.

As noted above, Houston got its quarterback battle underway and are likely pleased with the results thus far. They have to like Cecil Shorts creating that separation to get that long touchdown — it was his only catch on the day. Running back Alfred Blue also played quite well, carrying the ball nine times for 59 yards. Given Arian Foster’s injury, that’s a great sign for them. For the 49ers, they saw strong play out of backup quarterback Blaine Gabbert, but the starting offense failed to get going. Rugby league convert Jarryd Hayne looked great as a running back and as a returner though, which is definitely good news after Frank Gore left this offseason.

LatinoAthlete Staff - July 8, 2015
0
His second was a garbage goal, and against the run of play, but who cares? Clint Dempsey is great, even when his team...