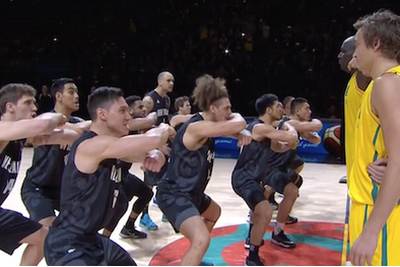 Oceania basketball is back!

Qualification for the 2016 Olympics took place in Melbourne on Saturday, with Australia and New Zealand competing for a spot in Brazil at the Oceania Basketball Championships.

The Australian Boomers are packed with NBA talent. Andrew Bogut, Patty Mills and Matthew Dellavedova all in Gold and Green this week. As New Zealand found out, they aren’t easily intimidated.

Like past meetings, New Zealand performed the Haka — a traditional Maori war cry which is used to intimidate opponents. The Haka is also used in Rugby and various sports across New Zealand. The USA Basketball team was once pretty confused by it.

The Boomers, however, were not concerned and put on a show. They won 71-59 with Patty Mills (Dante Exum’s replacement) finishing with 17 points as Cavaliers point guard Dellavedova added 15 points.

Patty had some fun, too!

Probably main reason Patty Mills likes to play for Australia. He gets to do this, which doesn’t fly on Pop’s team. pic.twitter.com/FIy8pIoC9i

Both teams meet again next Tuesday.

Zach Ertz shaping up to be a game-time call, still a...