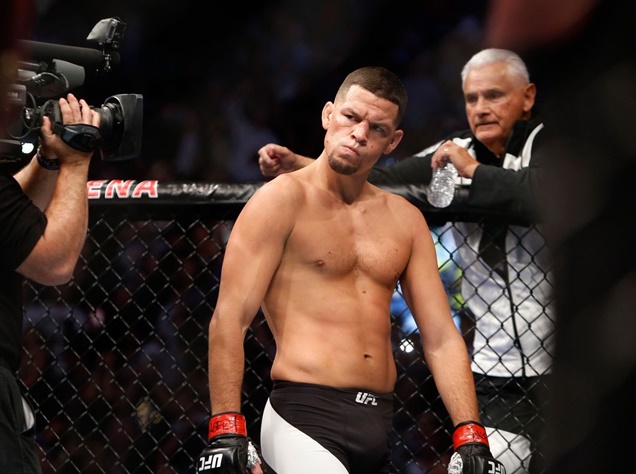 Nate Diaz, who has been demanding a rematch with Conor McGregor since his fight at UFC 202 where he received $1 million has just landed a lawsuit.

According to a new lawsuit filed by Nate Diaz former agents, he allegedly owes them money. Read on…

LatinoAthlete.com has learned that the lawsuit that has been filed in District Court in Dallas by The Ballengee Group, Nate Diaz former agency.

The Ballengee Group is claiming that they negotiated several deals for Nate, including both fights against Conor McGregor.

Why are they suing Nate Diaz?

It is being said that Nate Diaz never paid the group for negotiating his contract for UFC 202, so now they’ve slapped him with a lawsuit. They are asking for $1 million in damages.

Diaz and The Ballengee Group parted ways. Basically, the MMA fighter pulled a shady move and allegedly fired the group after the bout negotiations were already completed. This all happened before Diaz stepped into the Octagon with McGregor for the second time.

Diaz reportedly made a disclosed $2 million from the bout. He also made an extra $50,000 for his Fight of the Night performance. Though, the amounts do not include PPV points that Diaz received for the event, which are substantial.

We find this interesting since last week Nate announced that he was no longer waiting for a McGregor rematch. The news dropped when the Mayweather vs McGregor fight was announced. The fight that Oscar De La Hoya is calling a “disrespectful” stunt by Dana White.

White Sox pitch their way to sweep of Astros