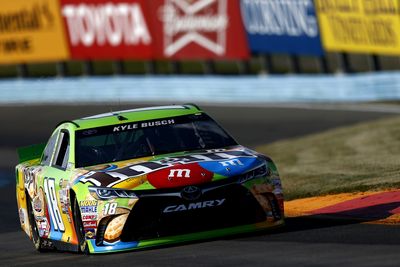 A win Sunday would give Kyle Busch victories on both road courses this season.

Kyle Busch’s three-race winning streak may have come to an end a week ago, but he sees no reason why he can’t start anew Sunday at Watkins Glen International.

Busch’s confidence stems from not only having won four of the past six races, but that one of those victories occurred at Sonoma Raceway, which — along with Watkins Glen — is one of two road courses on the Sprint Cup schedule. He is a two-time Watkins Glen winner (2008, 2013).

“Just look forward to these races, I always do every year,” Busch said Friday. “It’s kind of fun, it’s kind of a ‘weekend off’ from the oval stuff. Love the opportunity to get out there and turn right, turn left and have some shifting going one and everything else.

“Over the years we’ve run real well here at Watkins Glen. I’m really optimistic about being here this weekend and hopefully carrying that road coarse momentum through to Watkins Glen.”

When Busch won in June at Sonoma, he did so a month after returning from a broken right leg and left foot that kept him out of the season’s first 11 races.

A left-footed braker, Busch admitted to being sorer than expected afterward. But with additional time to continue rehabilitation, he isn’t expecting any issues with his surgically repaired foot Sunday.

“I’m doing really, really good and I feel really, really good week in and week out getting out of the car,” Busch said. “Everything is going real well for me. I can’t wait for the offseason to get the plates removed in my foot and then I feel like I’ll be right back to what I was before.”

That run of three consecutive wins ended when Busch ran out of fuel while leading on the final lap of the Windows 10 400 at Pocono Raceway. Joe Gibbs Racing teammate Matt Kenseth passed a slowing Busch to score the victory.

Because he missed 11 races, Busch still needs to accumulate enough points to move inside the top 30 in the standings to earn Chase for the Sprint Cup eligibility. He trails David Gilliland (currently ranked 30th) by 13 points with five regular season races remaining.

“It’s just a matter now of hoping to continue this wave, this ride all the way through the (end of the season).”

LatinoAthlete Staff - July 2, 2015
0
The Green Bay Packers have moved ahead of the Seattle Seahawks as the preseason favorite in the odds to win Super Bowl...