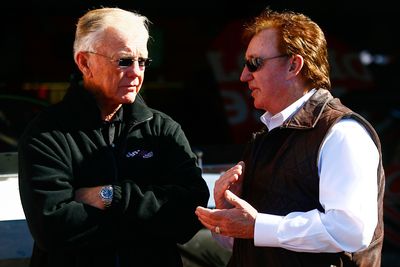 Being a NASCAR team owner isn’t cheap, offers little financial reward and comes with a high risk of failure.

The adage has been said so many times that determining who the first to say it is difficult. Regardless, in many ways it’s the overriding principle of being a NASCAR team owner: “To make a small fortune in racing, you have to start with a big one.”

Unlike other professional sports, NASCAR doesn’t have franchises or a structure in place to protect its owners and ensure some modicum of profitability. If you have a yearning to own a team, there are no background checks into your finances, nor do you have to seek the approval of other owners.

In a way being a NASCAR owner is capitalism in its purest form. If you want to spend the money and take the risk, which is great, then the only thing you need is incredibly deep pockets and a willingness to write extremely large checks.

Except the business model of NASCAR team ownership is not only broken with many teams teetering on insolvency due to exorbitant operating costs with little to show on their investment, but has become so exclusionary it’s near impossible for any owner to enter the sport and experience sustained success.

Whereas an astute front office, proficient player development and sage coaching is the formula to success on the field and off in the stick-and-ball sports, NASCAR ownership is almost solely dependent on sponsorship. With proper funding, a team can continue to exist, even grow, while preserving stability from one year to the next. But without it, even the biggest organizations will struggle even if the team possesses a sound driver lineup, an array of brilliant crew chiefs and fast cars.

And when sponsorship isn’t available and an owner is all but forced to bail, what are their teams really worth? If an NFL or NBA team goes on the market, the sale price is in the billions. But in NASCAR the team itself is tangibly worth very little — any value comes in its inventory of cars, parts, machinery and the land on which its headquarters sits.

“The only thing that’s valuable is the contracts from sponsorships,” said Kyle Busch, himself a Truck Series owner and former Xfinity Series owner. “When you have investors come in or when you have people that come in that want to buy out another race team, essentially all they’re buying out are those contracts.

“When it is time for [an owner] to sell out or get out or whatever it might be, the only thing they’ve got is equipment, which is 10 cents on the dollar, and land and buildings and shop equipment and everything else, which is 50 cents on the dollar. There’s really nothing worth value besides those contracts from sponsors.”

When Michael Waltrip Racing entered the Sprint Cup Series in 2007, it did so with three full-time cars each fully sponsored and as a flagship team for Toyota, which was entering NASCAR’s top division.

Quickly, though, Waltrip realized ownership was an expensive proposition and, facing increasing debt, the two-time Daytona 500 winner sold a 50 percent stake in MWR to Rob Kauffman in the fall of its inaugural season. That brought the team stability and gradually it became increasingly competitive, with driver Clint Bowyer finishing second in the championship in 2012.

MWR’s formation and subsequent ascent was something NASCAR badly needed, as a select few owners hold a virtually stranglehold on race wins and championships.

Rick Hendrick, Gene Haas and Tony Stewart, Jack Roush, Roger Penske, Joe Gibbs and Richard Childress have won all but one Sprint Cup title since 1993. (The only exception is Robert Yates, who sold his team after the 2007 season.)

Their respective dominance combined with the cost of starting and operating a team, a limited number of prominent engine and manufacturer suppliers — Hendrick and Childress (Chevrolet); Roush/Yates (Ford) and Toyota Racing Development — created essentially an impervious landscape where any team outside the six powerhouses has a clear glass ceiling on what it can accomplish.

The difficulty in trying to become a major player is further underscored by the fact that only Stewart-Haas Racing was formed after 1992, a rise significantly aided by a close relationship it shares with Hendrick Motorsports, which supplies SHR with cars and engines.

What puts NASCAR in a precarious position beyond just the lack of fresh ownership at the top of its standings is the ages of the men positioned there now. Hendrick, Childress and Haas are in their 60s; and Roush, Gibbs and Penske are in their 70s.

Waltrip, 52, and Kauffman, 51, were supposed to represent an infusion of youth within the ownership ranks — proof entrepreneurs could enter NASCAR and overcome the numerous obstacles to obtain elite prosperity.

But that idea has evaporated with MWR becoming the latest NASCAR team to collapse due to an overstretched budget, lack of results on the track and not enough sponsorship to ensure long-term viability. A frustrated Kauffman announced last month he was divesting himself of MWR, and purchasing an undisclosed interest of Chip Ganassi Racing where he won’t be solely responsible to support the team financially.

“Michael Waltrip Racing really wouldn’t have existed through to today without a significant and continued financial support from me,” Kauffman said last week at Bristol Motor Speedway. “I think that just from a business standpoint it didn’t make sense any longer. You can’t have a top-10 budget and top-10 resources and not be in the top 10 for a sustained period of time. This is a performance-related business and it’s all about performance.

“It’s a great sport, but a very difficult business model. From a business decision, it just made sense to not go forward with that organization because it just wasn’t commercially viable.”

That Kauffman, a billionaire hedge fund investor, couldn’t make ownership feasible is telling. He spearheaded the formation of the Race Team Alliance last summer with the stated purpose of making NASCAR more affordable.

Since organizing, the RTA has operated almost entirely behind the scenes, focusing its efforts on consolidating expenses for lodging and the transportation of crewmembers to and from races — areas where before each team made its own arrangements.

But the RTA’s primary objective is working with NASCAR to craft a model where owners get greater value and protection on their sizeable investments. In essence, NASCAR would be creating franchises akin to other sports.

The details are still being worked out with no announcement imminent. Nonetheless, however the system is constructed, it’s a dramatic departure from NASCAR’s longstanding policy that its teams are not independent contractors as forever maintained, but partners who need some protection.

“It’s in our best interest to have healthy team owners who have the best opportunity to field quality race teams,” NASCAR CEO and chairman Brian France told SiriusXM Radio last month. “That’s a goal that we’ve had for a long time. That remains. In any way we can do to benefit that business model and create more opportunities for ownership, for example, whatever we may be, all of those things are what are being discussed.

“Our best interests, of course, are to make sure our team owners are healthy. They’ve said they have a lot of challenges right now. We’re listening to that because they are one of the most important stakeholders in NASCAR.”

Unfortunately, any initiatives that may eventually come won’t arrive in time to solidify MWR’s future, with the two-car team ceasing operation at the conclusion of the season.

“It’s a very challenging model,” Kauffman said. “At the same time I think it’s on track to improve with the discussions we’ve had in the last year or so with the folks at NASCAR and the long-term equity program we’ve been discussing. It’s a little bit complicated to figure out. Rome wasn’t built in a day, so we’re making progress. I’m optimistic that we’ll come up with something that’s better long-term.”