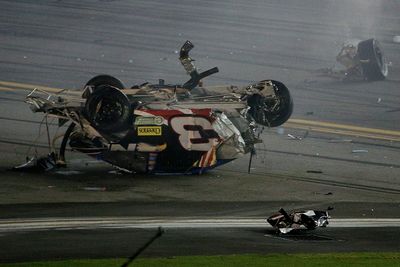 Austin Dillon was somehow okay after a huge wreck at the end of the Coke Zero 400 at Daytona.

As Dale Earnhardt Jr. raced under the checkered flag to score a dominating victory early Monday morning at Daytona International Speedway, complete mayhem broke out behind him with Austin Dillon flying into the catchfence.

This is incredible and somehow all the drivers were fine pic.twitter.com/lzzsf2qgeL

Tony Stewart’s view of Austin Dillon going airborne and into the fence is terrifying pic.twitter.com/UUz7YxLtXV

Dillon’s car landed upside down, and track workers and crew members from various teams quickly arrived on the scene. The 25-year-old emerged uninjured and raised his hands to the crowd. However, three fans were being treated for unspecified injuries, according to NBC Sports.

The view from the other side of the fence was terrifying.

Dillon was seemed to be okay, despite a lot of damage on the track.

Great to see @austindillon3 walk away after that scary ending. pic.twitter.com/MEX1SqBZuG

LatinoAthlete Staff - July 13, 2015
0
Good morning! It's your rundown of what happened in college football this weekend. Troubles in Tallahassee. Florida State star running back Dalvin Cook...