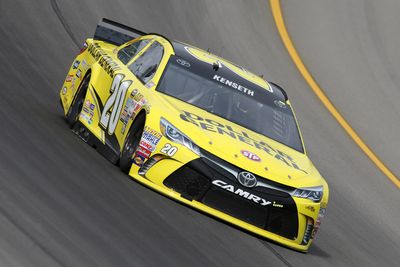 Matt Kenseth has the pole position for the Pure Michigan 400 on Sunday from Michigan International Speedway in Brooklyn, Mich., looking for his third win of the season.

Kenseth captured the pole with a qualifying speed of 197.488 mph on Friday, looking for his second career Pure Michigan 400 victory, having won in 2006. Kenseth has won two races this season, at Bristol and at Pocono, and currently ranks seventh in points.

2015 NASCAR Sprint Cup points leader Kevin Harvick starts in seventh position on Sunday. He has won two races in 2015, and finished second an astonishing eight times. He has also finished in third place in three of the last four weeks. Harvick won the Pure Michigan 400 in 2010.

This is the second race of the season at Michigan International Speedway. Back on June 14, Kurt Busch won the Quicken Loans 400. He starts in 16th position on Sunday, looking for his second Pure Michigan 400 victory, having won in 2007.

Brother Kyle Busch won the event in 2011, and starts in sixth position on Sunday. Kyle Busch has four wins and a second-place finish (last week, at Watkins Glen) in his last seven races.

Joey Logano won last week at Watkins Glen and is second in points this season. He starts in 10th position on Sunday. Logano won the Pure Michigan 400 in 2013.

LatinoAthlete Staff - August 19, 2015
0
There is absolutely no reason to blame this bear for wanting to jump in a hot tub. Hot tubs are objectively great,...