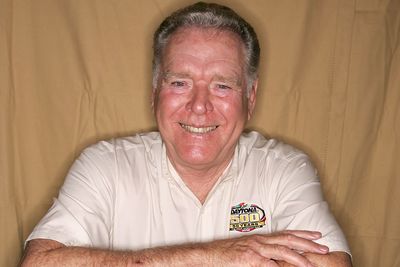 The 1980 Daytona 500 winner announced the diagnosis on his radio show Tuesday night.

Buddy Baker, a former Daytona 500 winner and one of NASCAR’s all-time great super speedway racers, stepped down from his SiriusXM NASCAR Radio show due to inoperable lung cancer Tuesday night.

“For those who feel sorry, hey I’m 74 years old, have great friends, had a career,” Baker said. “The toughest part for me is not being able to talk to some of our regulars that are almost like family.”

Standing 6-foot-6, the genial and good-natured Baker was nicknamed the “Gentle Giant” during a career that began in 1959 and concluded in 1992. He is the son of NASCAR Hall of Famer Buck Baker.

Baker didn’t delve into details about his diagnosis, only saying doctors discovered a “huge” cancerous tumor and the prognosis was unfavorable.

“There comes a time when you talk to the doctor and say what are my chances and there’s dead silence,” Baker said. “I went, ‘How long?’ ‘Well, we don’t own the hotel, we don’t know when we check out. It’s something that we cannot fix.’

“Everything has a start and an ending and mine has been overwhelming.”

After retirement Baker enjoyed a career as a popular NASCAR television analyst for CBS and TNN. He began hosting a SiriusXM show in 2007.

“Do not shed a tear,” Baker signed off Tuesday. “Give a smile when you say my name. I’m not saying goodbye. Just talk to you later.”

LatinoAthlete Staff - November 12, 2013
0
Jose Fernandez of the Miami Marlins and Wil Myers of the Tampa Bay Rays were selected baseball's rookies of the year Monday. Fernandez stood out...