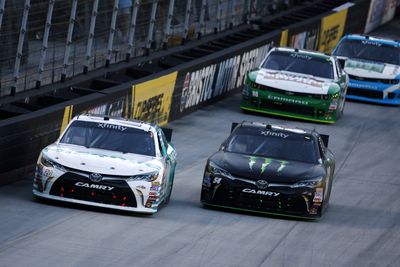 A look at the broadcast information for the 2015 Irwin Tools Night Race from Bristol Motor Speedway in Tennessee, a rare Saturday night race on the NASCAR circuit.

As the Chase for the Sprint Cup nears, the 2015 NASCAR season shifts to Tennessee for the Irwin Tools Night Race live from Bristol Motor Speedway on Saturday night. This is the 24th race of the season, with only two more races after this before The Chase begins.

Denny Hamlin, a winner of this race in 2012, captured the pole position during qualifying on Friday, looking for his second victory of the season. Hamlin — who ranks eighth in points this season — has seven top-five finishes in 2015.

NBCSN will televise the race, beginning with the pre-race ‘Countdown to Green’ show at 7 p.m. ET, hosted by Krista Voda alongside analysts Mike Massaro, Kelli Stavast and Dave Burns. Coverage of the race begins at 7:30 p.m., with Rick Allen, Jeff Burton and Steve Letarte calling the race from the booth, with pit road reporters Massaro, Stavast, Burns and Marty Snider.

The race can be followed online and via mobile devices through NBC Sports Live Extra. The race will re-air on NBCSN on Monday at noon.

LatinoAthlete Staff - August 9, 2015
0
Will Shields was part of a unit as a player, and he deferred congratulations for his success in his Hall of Fame...