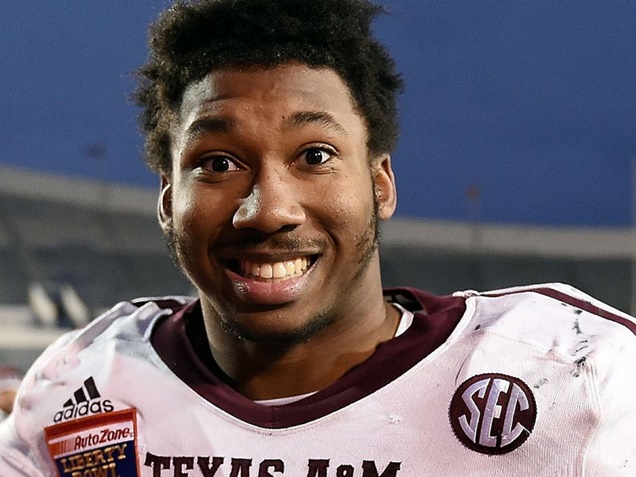 The NFL Draft is right around the corner and No. 1 overall pick in the NFL Draft, Myles Garret, is hoping to stay in the Lone Star State.

Myles Garrett already knows where he wants to go, but involves having Dallas Cowboys, Tony Romo traded out. Read more…

LatinoAthlete.com has learned that Myles Garrett has pleaded with the Cowboys to select him with the top pick on April 27.

The only problem is the Cowboys don’t have top pick?

Now worries the College graduate has it all worked out. The Texas A&M defensive end sent a video message to Cowboys owner Jerry Jones and coach Jason Garrett.

In the video, Myles explained how Dallas can make this all happen. First thing, they must trade Tony Romo to the Cleveland Browns.  The 21-year-old said in the video.

“I’m speaking to you Jerry. Mr. Garrett, make it happen. I need you to take Tony Romo, take a couple picks and give them to Cleveland so you can pick me up. Please, I’d love to play in Dallas, just make it happen.”

It’s a pretty balsey move on his part, but what does that say about Myles Garret as a team player? Plus, they have Dak Prescott and Ezekiel Elliott?

Bottom line, Garrett isn’t a fan of the cold, he wants to stay where his career started. In December, he said:

“It doesn’t matter, but I’d like to not go anywhere cold.”

Garrett obviously doesn’t have a subtle bone in his body and never read the memo called “humble beginnings.” He continues to throw hints Tony Romo should leave the Cowboys in a trade, so he can fill his position.

Unfortunately for the Arlington, Texas native because the odds of the Cowboys moving up from the 28th pick to No. 1 as good as the Falcons making it to Super Bowl LII. Plus, there is no what Cleveland would give up their top pick for an injury-riddled 36-year-old quarterback.

We will see how it plays out, but good luck to Myles Garrett who already announced that he doesn’t plan to attend April’s draft in Philly yctkztx.