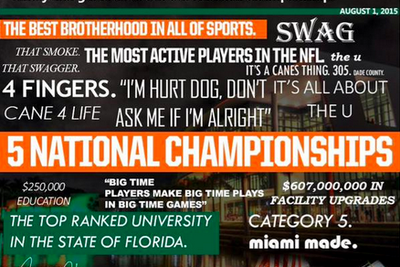 It’s that time of year for players to show off their offers and for Miami to USE ALL OF THE FONTS AT ONCE. We’ve collected a bunch below.

It’s August 1, ICYMI. That means it’s the first day on which class of 2016 football recruits can officially receive scholarship offers.

One fun thing about receiving an offer to play college football is showing off that offer on social media. While many schools still use the United States Postal Service to distribute those letters, lots of them arrive electronically, perhaps to take advantage of the fact that prospects are going to post them online for other prospects to see anyway.

This is a good and exciting time for hundreds of athletes across the country. It also gives us a look at how a variety of college programs are marketing themselves directly to potential signees.

Here’s a bunch of them, and the main thing you need to know is th– GOOD LORD, MIAMI.

The University of Miami’s official offer letter is a word cloud of the YouTube comments under any Ed Reed highlight video.

Only two have been spotted so far this year!

These official offers are cool pic.twitter.com/qG4AHXLSKg

Pretty good and/or pretty boring, but everything is fine

Most of these are fine! Some are great! Using the player’s photo seems to be a good idea!

Blessed to receive my official offer from the Indiana Hoosiers this is a blessing pic.twitter.com/YgA3JQsiP6

Got a official scholarship offer from Georgia southern pic.twitter.com/YskoE4073Z

Got my official offer from temple. A couple steps closer to being an official owl pic.twitter.com/jCEZwP5Xn0

Thanks to Mississippi St coaching staff for the 2nd official offer pic.twitter.com/dq3ZwAHOc6

First Official Offer came in! This is truly a blessing. #GoArmy pic.twitter.com/XKOzvOEXSi

I would like to thank God for my offer to the university of buffalo! God is so good ! ❤️ pic.twitter.com/pIW3tb0ojR

Baylor did a cool thing!

A little handwritten touch in each …

So blessed!!! Want to thank everyone that has helped me get to where I am today. My official scholarship pic.twitter.com/wnNDJ9jo7t

Thank you @CoachArtBriles !!!! And the rest of the Baylor Coaching Staff! #Blessed pic.twitter.com/1c4mPpVzkv

Georgia Tech’s looks like the form you fill out in order to be handed a form, and Paul Johnson’s won a lot of ballgames with those form forms.