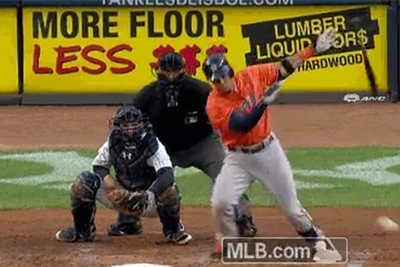 Recently, we at SB Nation documented how bat flips are an integral part of American history. Well, it appears multiple MLB players are trying to cement their own place in history. A standard bat flip on a home run is no longer good enough to earn a place in history.

Carlos Gomez made a strong bid for a place in the history book with a quality bat flip on a double. Yes, a double and not even the ground rule variety.

An extended bat flip on a double is pretty impressive, and on most nights would easily be the best bat flip of the night, but Tuesday was no ordinary night. Travis d’Arnaud pulled off an even more impressive flip that might be a contender for bat flip of the year. He drew a bases-loaded walk and released this beauty.

Now, that may not have been entirely intentional but in this case the results trump the process, and the result is a glorious bat blip that lands on home plate.

Bat flips on a walk and a double leave us only a flip on a triple and single shy of the best cycle in bat flip history.

Cardale Jones says Virginia Tech is one of the 4 toughest...

LatinoAthlete Staff - September 8, 2015
0
The Ohio State quarterback clearly doesn't have a large enough sample size for choices. Lane Stadium proved to be one of...