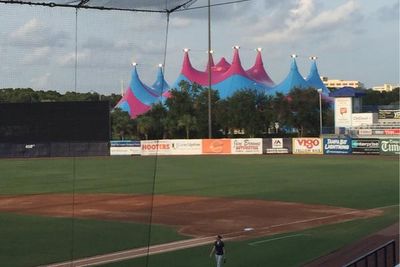 The Tampa Bay Yankees were all set to host the Clearwater Threshers on Friday night. The game even got underway, but then a funny thing happened. There is a circus happening nearby at Raymond James Stadium and part of the giant tent caused interference with the baseball game.

Baseball games get delayed for a lot of reasons. Rain, snow, a swarm of bees. The Washington Nationals had delay due to power issues which may or may not have been due to a Taylor Swift concert. But a circus? That has to be a new one.

That isn’t just any circus either; it’s Circo Hermanos Vazquez, which is in town Friday and Saturday. The teams are planning to make up the game with a double header on Saturday. The circus has two shows scheduled for Saturday, so we’ll see how well that works.

Any fans disappointed they won’t get to watch a baseball game can at least walk over and catch a circus performance, where it appears they have dancing horses.