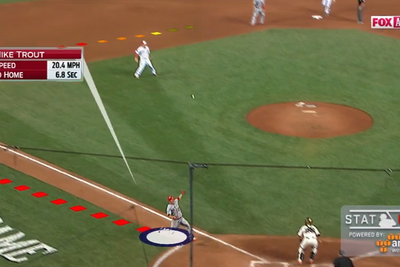 Mike Trout is putting on a show at the 2015 MLB All-Star Game. He showed his power early on, launching a leadoff home run to begin the game. Later, he showed off speed a 6’2, 230-pound man should not have. Thanks to some fancy technology from FOX, we know it took Trout only 6.8 seconds to score from second base.

Your browser does not support iframes.

Trout’s speed left Bryce Harper — who had a good vantage point from right field — in near disbelief.

“Trout can run, bro,” Harper said. “It is unbelievable.”

LatinoAthlete Staff - June 30, 2015
0
There will be thousands of televised mixed martial arts fights this year. Between the UFC's ever-expanding schedule, Bellator's ascendance on Spike TV and the...