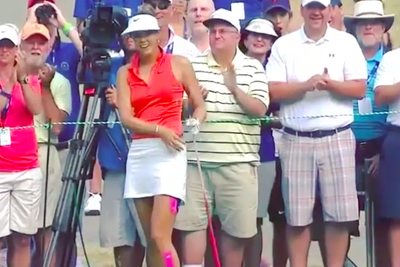 Michelle Wie came up short in her effort to defend her 2014 U.S. Women’s Open title, but she had the shot of the day when she nearly drilled a hole-in-one on the par-4 16th.

The highlight of my day! Not bad for finishing on one leg Check out USGA.org for more #USOPEN #wootwoot

Michelle Wie, doing her best Tiger Woods/2008 U.S. Open impression, hobbled around Lancaster Country Club all week on a sore hip. That did not stop her from nearly holing her tee shot on the par-4 16th in Sunday’s final round of the U.S. Women’s Open.

Wie was clearly in pain during an unsuccessful bid to defend her 2014 U.S. Open title, which she indicated by favoring her heavily bandaged left leg and booted ankle after her tee shot on the 235-yard hole. The crowd roared as her shot clanged off the flagstick and cheered appreciatively as she buried a four-footer for eagle.

Alas, the 25-year-old Stanford grad was unable to replicate her fellow Cardinal’s feat of winning the national championship on one leg, finishing in 11th place at 2-under, six shots back of winner In Gee Chun.

Chun shot a 4-under 66 on Sunday for a comeback victory over Amy Yang. The South Korean began the day four shots off the lead. With birdies on three of her final four holes to end her inaugural U.S. Women’s Open stint one shot better than Yang, Chun matched Annika Sorenstam (1996) and Juli Inkster for the four-day championship scoring record of 272.

LatinoAthlete Staff - August 21, 2015
0
On Thursday's episode of Late Night with Seth Meyers, WWE's John Cena forgot his wallet after his interview. Meyers, being the kind...