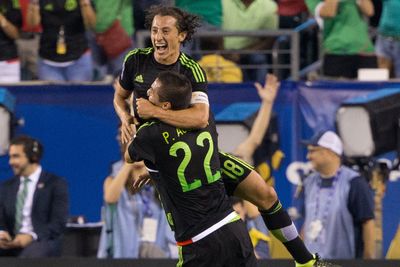 Mexico are the Gold Cup champions, and perhaps more importantly, they’ll take on the United States in a one-game playoff to see who will qualify for the Confederations Cup.

After the Gold Cup group stage, it looked like the United States would hold up their end of the bargain in setting up the marquee final, but Mexico would fail to get there. Fast forward a week and a half, and El Tri are in the final, but they’ll be facing Jamaica.

The Reggae Boyz survived an early flurry from the USMNT, then took over the last 20 minutes of the first half and took a two-goal lead. They were dominated for most of the second half, but were able to hold on for a 2-1 upset victory.

El Tri probably shouldn’t be here, and CONCACAF admitted as much. They got a stoppage time penalty while down a goal against Panama and eventually converted it after a fight about the call. Mexico went on to win in extra time, and Panama responded by calling CONCACAF corrupt thieves.

Don’t expect Jamaica to make many changes to the team that beat the United States in the semifinal. Jamaica have done a bit of experimenting in this tournament, but have had their most success defending with two banks of four and playing two strikers up top.

Mexico manager Miguel Herrera told reporters on Saturday that he hadn’t set his starting XI yet because he wasn’t sure about the fitness of a few players. Jonathan dos Santos, Giovani dos Santos and Carlos Vela are carrying knocks, but all of them took some part in the team’s last training session. Jonathan is expected to start, while Tecatito Corona could replace Vela.

SB Nation presents: Neymar has a real claim as the world’s best player

The Fighting Life: The Indomitable Spirit of Matt Brown

LatinoAthlete Staff - July 3, 2015
0
In mixed martial arts, there is little personal discovery to be found until the limits of a comfort zone are left behind. Adversity comes...