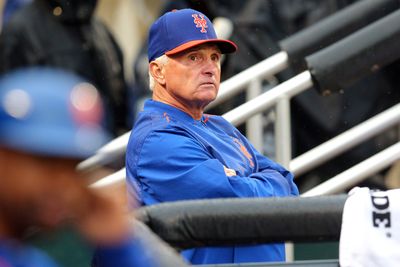 Well, they do have more starting pitchers than they need for one rotation.

Things are not going great for the Mets. They’ve lost three games in a row and have fallen 12 games back in the standings over the last two-plus months. Whereas on April 27 they were eight games up on the Nationals, they now find themselves at .500 and four games back of Washington.

Mets manager Terry Collins has nearly run out of ideas for how to get his team out of its funk, but after Thursday’s game he let it be known he has one desperate move left:

Terry Collins: “The only thing left is human sacrifice, so we’re going to pick somebody.”

Human sacrifice is a serious matter — you can’t just pick any old Met to toss into a volcano or what have you. That’s why it’s a tough decision, and why Dillon Gee hasn’t been offered up to the baseball gods yet. He’s pitching too poorly for any self-respecting and vengeful god to be impressed by that “sacrifice.”

Jon Niese, on the other hand, has trade value left, so maybe instead of dealing him, the Mets just … you know. Appease some sports-loving deities. Hey, it was Terry’s idea, okay, we’re just here to explain it.