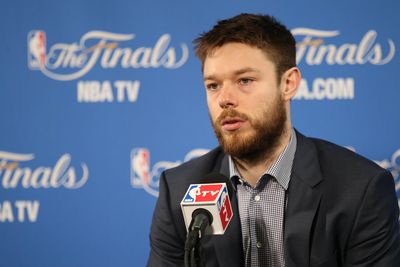 Dellavedova was unavailable to speak with the media following the Cavaliers’ 96-91 victory over the Warriors in Game 3, during which the second-year guard scored 20 points, had five rebounds and four assists in 39 minutes.

Cleveland leads the best-of-seven series, two games to one.

Dellavedova is averaging 9.7 points and 3.7 rebounds per game in the series.

The Cavaliers say Dellavedova underwent a treatment process that included receiving intravenous fluids at the arena, and that he will continue to receive treatment Tuesday night at the Cleveland Clinic.

Strange scene: Walking out of Cavs Arena at 1:35 am and I see Matthew Dellavedova get on a stretcher and get taken away in an ambulance.

As for Delly & stretcher, #Cavs say he walked out of arena on his own. Walked to ambulance. Getting on stretcher standard protocol

The team says they will update his status on Wednesday afternoon.

Game 4 of the NBA Finals is scheduled for Thursday night at 9 p.m. ET at Quicken Loans Arena in Cleveland.

LatinoAthlete Staff - August 28, 2015
0
Fantasy owners in competitive leagues are really going to want to clean up on backs in the midst of a position battle....