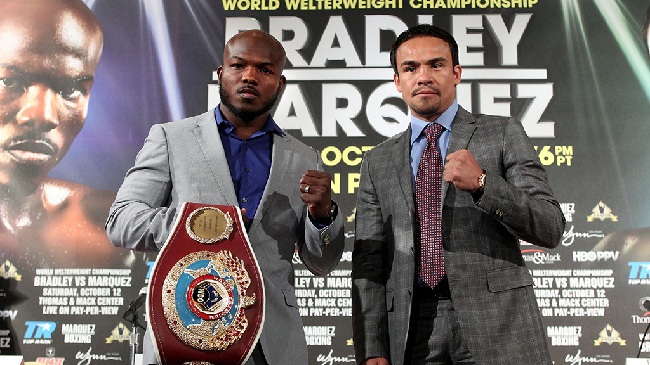 Manny Pacquiao, boxing’s only eight-division world champion and one of boxing’s biggest stars, has officially lost his last two fights.

First came the ultra-controversial split decision against Timothy Bradley Jr. in June 2012, which cost Pacquiao his welterweight world title. There was no such controversy in December as Juan Manuel Marquez, seemingly on the verge of being stopped, unleashed a monstrous overhand right that Pacquiao never saw as the sixth round was ending and knocked him out cold, the first definitive result in their epic series, which Pacquiao still leads 2-1-1.

When it came time for Top Rank promoter Bob Arum to put together Pacquiao’s next fight, which will take place in Macau, China, on Nov. 23, he naturally looked to Bradley and Marquez as the top candidates for the fight and made offers to both.

The controversy over Pacquiao’s first fight with Bradley certainly would generate huge publicity for another pay-per-view fight. Marquez and Pacquiao already had four great fights, and given the way the fourth one ended, there was a lot of interest — meaning another pay-per-view bonanza — in a fifth fight.

Amazingly, Bradley (30-0, 12 KOs) and Marquez (55-6-1, 40 KOs) both turned down the opportunity to face Pacquiao again, turning their backs on career-high purses in the process. Instead, Pacquiao will face former lightweight titlist Brandon Rios while Bradley will defend his welterweight title for the second time when he faces Marquez on Saturday night (HBO PPV, 9 ET) at the Thomas & Mack Center in Las Vegas.

But in a sport in which money is usually the No. 1 consideration for any deal, why, oh why, would Bradley and Marquez turn down a chance to fight Pacquiao again and instead face each other, in what will still be a terrific match, but not nearly as high-profile had Pacquiao been on the other side of the ring?

“Money isn’t everything,” Arum said in a shocking comment. “These guys aren’t fighting on Oct. 12 for peanuts. The purses they are getting are substantial and legacy is important for both Timothy and Juan Manuel Marquez. Timothy wants Marquez …  And Marquez wants to be the first Mexican to win five world titles in five weight divisions. Both of them indicated to me that Pacquiao could wait.”

Marquez is guaranteed $6 million while Bradley will earn a minimum $4.1 million, both of which are smaller purses than they would have made against Pacquiao.

Marquez just was not interested in going back to the well yet again, especially after the way he drilled Pacquiao in December in one of the most memorable knockouts of modern times.

“To me it didn’t make sense,” Marquez said. “There was no sense in doing a fifth fight. We had the definite answer on who was the best that night and we had three other close fights. I don’t see why we need to do another fight.

“It was a definite ending to our rivalry. If it would have been a close fight or controversial, I would be doing a fifth fight right now. It doesn’t make sense to do it now.”

As Arum said, claiming Bradley’s belt to become the first Mexican to win a world title in five weight classes is also a big reason why Marquez opted to fight Bradley instead of Pacquiao again. Marquez has already won titles at 126, 130, 135 and 140.

Bradley’s reasons for declining another Pacquiao payday are different from Marquez’s, but it didn’t stop him from making the surprising decision.

10 vs.10 Dota revealed at The International All-Star Game

LatinoAthlete Staff - August 7, 2015
0
Team N0Tail defeated Team Chaun at the All-Star Game of The International Dota 2 Championships, and it was an absolute mess in...