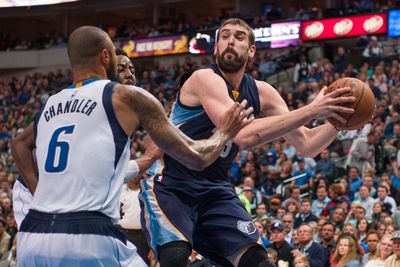 Marc Gasol was ranked as our No. 3 free agent of the NBA offseason, but it appears the 30-year-old big man won’t be changing homes this summer. Gasol is set to meet with Memphis Grizzlies officials when free agency opens on Wednesday morning in his native Spain and doesn’t have meetings scheduled with any other teams, according to Marc Stein of ESPN.

Stein notes the possibility of Gasol and the Grizzlies quickly reaching a verbal agreement on a new deal. While the Knicks, Spurs and Lakers are among the teams who had hoped to pitch Gasol, any indication is that the center will re-sign in Memphis for a five-year max deal worth as much as $110 million.

While Gasol was born in Spain, he was essentially raised in Memphis when his brother Pau began his career with the Grizzlies. Gasol has played his entire seven-year career in Memphis, making two All-Star Game appearances, winning Defensive Player of the Year in 2013 and being voted First Team All-NBA this past season.