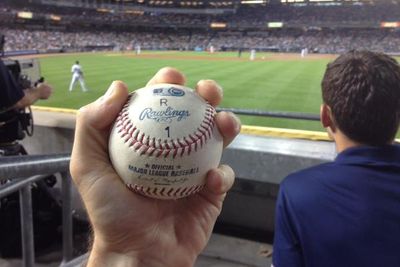 A well-known collector caught the valuable ball. And he isn’t giving it up.

Zack Hample is a baseball collector who has caught over 8,000(!) balls at major league stadiums. On Friday, he snatched perhaps the most important ball of his life:

Here’s A-Rod’s 3,000th hit/ball. Told the @Yankees I’m keeping it. Got it authenticated by @MLB. This is un-REAL. pic.twitter.com/qEo2qX9Iru

NJ.com managed to get a lightning-fast interview with Hample. He’s standing his ground.

“I think that someone like Derek Jeter or Alex Rodriguez, who has made half a billion dollar in his career, doesn’t really need a favor from a normal civilian and a fan like me. I don’t know right now if I’m going to sell it. I mean, depending on what the Yankees could offer, I would consider giving it back. I’m not giving it back for — I don’t plan to give it back for a chance to meet him and full autographed bats because I don’t collect bats, I collect baseballs. Just having this ball is so meaningful to me. I can’t believe that I got it.”

This is a good time to remind everyone that a former police officer tracks down all of Alex Rodriguez’s home run balls for him. He has a pretty good track record for getting them back. Not this time.

We asked college basketball coaches if they like the rap music...