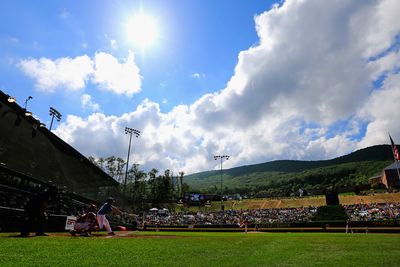 Welcome to Friday at the Little League World Series, which is twice as packed with baseball action as before. With all four games from Thursday postponed, Friday now features eight games instead of four, with all 16 teams in play.

The ESPN family of networks will provide all-day coverage of the first day of action in Wiliamsport, Pa., with games on ESPN, ESPN2 and ESPNEWS.

Every game will be available to watch online via Watch ESPN.

Fitting all eight games into one day on Friday keeps the Little League World Series on schedule, and with the scheduled off day on Friday, Aug. 28, there is still room to deal with future weather delays.

Play opens at 10 a.m. ET with the Caribbean team, from Santiago de los Caballero in the Dominican Republic with the home team against the team from Kampala, Uganda, representing Europe-Africa. The final game will feature a pair of U.S. teams at 8 p.m., with the Midwest team from Webb City, Mo., facing off against the Mid-Atlantic team from Lewisberry, Pa.

LatinoAthlete Staff - August 1, 2015
0
If you have somehow avoided the Meek Mill/Drake beef over the past week, that's okay. All you really need to know is...