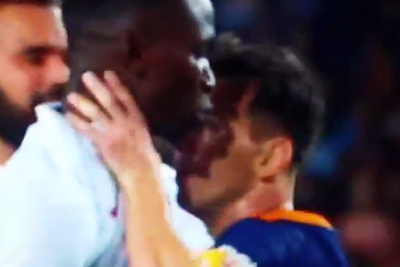 What on Earth is Messi thinking?

Barcelona were already beating up on AS Roma in their friendly match on Wednesday, up 2-0 in the first half thanks in large part to some absolutely sublime play from Lionel Messi. Then Messi lost his head after getting fouled by Roma defender Mapou Yanga-Mbiwa, and, well, just look for yourself.

Messi has lost his head pic.twitter.com/WLFSwbB1B9

Yes, that’s Messi headbutting Yanga-Mbiwa — albeit after the Roma player had already leaned his head in — and then upping the ante by grabbing his throat and shoving him back. You can just see Yanga-Mbiwa saying something at the edge of the frame as Messi approaches him, but no matter what he said, there’s no justification for Messi’s action.

Somehow, neither player was sent off, but don’t be surprised if there’s further punishment for these actions later on down the line, because that is in no way, shape, or form OK. Even if Yanga-Mbiwa said something awful, Messi should never have done what he did, and will fully deserve a harsh punishment should one be meted out. You just can’t headbutt someone, and you certainly can’t grab them by the throat like that.

Sheldon Richardson gives most poorly timed quote ever an hour before...