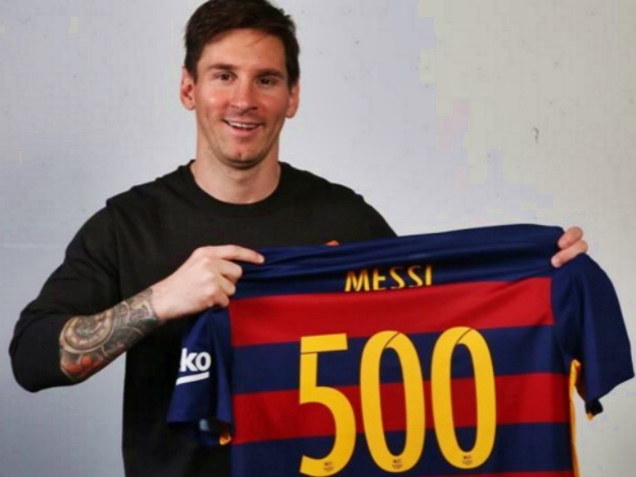 Lionel Messi made an impressive 500th career goal on Sunday as FC Barcelona and Real Madrid faced off in El Clasico!

LatinoAthlete.com is a fan of Lionel Messi who gave not one but two outstanding moments of brilliance to remember him by.

The Argentine FC Barcelona player made the last kick of the clásico count sinking the Real Madrid and keeping Barcelona in race. Lionel Messi perfectly executed by guiding the ball inside the post to take his team top. It was the 500th goal of Messi’s career.

The brilliance of Messi was noted by Luis Enrique to say:

“He is the best player in history.”

The Barcelona manager, Luis Enrique, couldn’t stop gushing over Messi being a true talent on the field.

“He is incredibly decisive at all times. I have seen a lot of football, it is a great pleasure that he is one of us.”

He went on to say this about the match between FC Barcelona vs Real Madrid:

“It was a match between two wonderful teams that gave everything to win and in truth either side could have been victorious.”

The first game in the opening half, Lionel Messi tied the score at 1-1 in the 33rd minute, but it was the later half that made it interesting. Barça was up 2-1, when Real scored to tie it when James Rodriguez finished off a gorgeous cross from Marcelo. It all came down to the final seconds of the game when Barça made one last run into the box and Messi hammered a perfect shot giving FCB the win.

Take a look at Messi’s incredible moves on the field:

Hay Liga!#Messi racks up his 500th career goal. Oh, and it just so happens to settle the best #ElClasico in a long time! pic.twitter.com/ZvF5mxrCG0

LatinoAthlete Staff - August 8, 2015
0
There will be no referees lockout in the near future. The NBA and the National Basketball Referees Association have tentatively agreed on a...