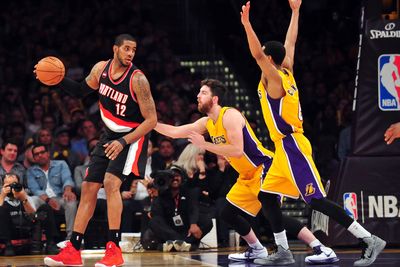 The longtime Trail Blazers star is a free agent and appears likely to depart Rip City for greener pastures.

LaMarcus Aldridge is one of the top unrestricted free agents this summer, and he should have no shortage of suitors if he decides to leave the Trail Blazers. Aldridge is reportedly favoring the Los Angeles Lakers and San Antonio Spurs in free agency if he leaves Portland, according to ESPN’s Marc Stein.

ESPN sources say Lakers appear to be passing Dallas on list of likely destinations for Aldridge should he leave POR. San Antonio still No. 1

The Aldridge rumors come on the heels of speculation about a possible Lakers trade for DeMarcus Cousins. The Lakers could reportedly send the No. 2 pick, Julius Randle and Jordan Clarkson to Sacramento for Cousins. Imagine Los Angeles doing that deal, then signing Aldridge to a max contract. Kobe Bryant’s final season would suddenly get a lot more interesting.

Stein points to Portland’s decision to trade veteran wing Nic Batum for Gerald Henderson and 19-year-old forward Noah Vonleh as one sign Aldridge could be leaving. Aldridge had previously stated his desire to remain in Portland, but that may be changing after an injury plagued season (for both himself and the team) that ended with a first round playoff loss to the Memphis Grizzlies.

Aldridge placed No. 4 on our list of every NBA free agent this summer.

LatinoAthlete Staff - August 19, 2015
0
There is absolutely no reason to blame this bear for wanting to jump in a hot tub. Hot tubs are objectively great,...